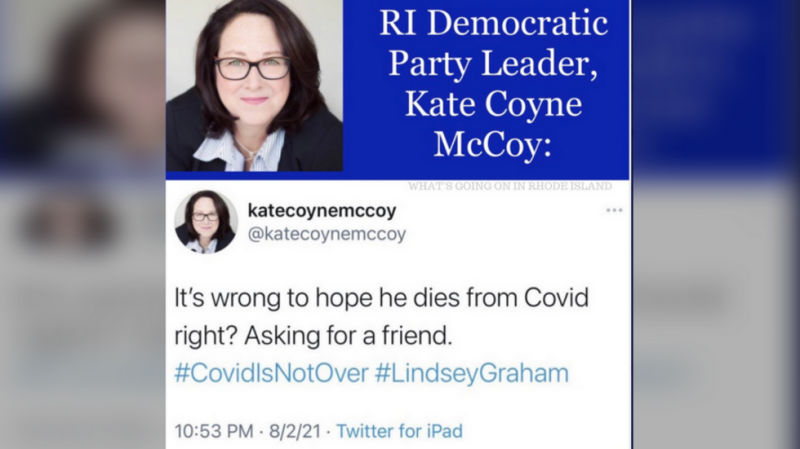 “In a time when many human lives have been lost to Covid-19 all across Rhode Island, this comment is extremely distasteful and insensitive,” Black Lives Matter RI PAC said on Wednesday in a Twitter post. “Regardless of political affiliation, the disregard for human life is unacceptable and should not be tolerated anywhere within any political party.”

The statement came in response to a since-deleted tweet on Monday night by political strategist Kate Coyne McCoy, who reacted to news of Graham (R-South Carolina) contracting Covid-19 by saying, “It’s wrong to hope he dies from Covid, right? Asking for a friend.” Graham announced on Monday that he had been infected with the virus despite being fully vaccinated and credited the jab with preventing him from suffering worse symptoms.

McCoy’s hateful comment drew pushback on Tuesday from mainstream allies, including Rhode Island Democratic Party chairman Joe McNamara, who said he was “furious” and had informed the strategist that her consulting contract with the organization would be reviewed. “It’s a horrible thing to say, especially in light of the fact that we have lost so many loved ones to the pandemic,” he said.

Rhode Island Governor Dan McKee called McCoy’s tweet a “serious mistake,” while state House Speaker Joseph Shekarchi said it was “offensive” and didn’t reflect the Democratic Party’s views. But McKee, Shekarchi and McNamara all said they were pleased that McCoy had issued an apology. The strategist tweeted on Tuesday that she had “made a mistake” and “used poor judgment, which I obviously regret.”

The Rhode Island BLM political action committee appeared to be less moved than the party’s leaders by McCoy’s statement of regret. “How can we trust someone with such blatant disregard for human life with the will of Rhode Island voters?” the group asked. “Anyone affiliated with the Democratic Party should be held to a higher standard.” BLM added that “anything short of an immediate resignation would signal that these types of comments are acceptable within the Rhode Island Democratic Party.”

BLM’s principled statement comes amid rising political vitriol in the US, where differences of opinion are increasingly viewed as grounds for censorship or violence. US Representative Steve Scalise (R-Louisiana) and three other people were shot in a politically motivated attack by a supporter of Senator Bernie Sanders (D-Vermont) in 2017. Senator Rand Paul (R-Kentucky) and others who attended an August 2020 speech by President Donald Trump at the White House were assaulted by a mob of protesters while leaving the event.

Podcast host Jonathan Gilliam, a former Navy SEAL, called McCoy’s statement of regret “1,000% the perfect example of the leftist ideological mindset.” He added, “They promote hate, violence and disregard for life. When called out, they attack or they apologize for the act, never admitting their hate.”

Seattle radio host Jason Rantz agreed, saying of McCoy’s apology, “No, you’re just a ghoul. You said what you said because you believed it.”