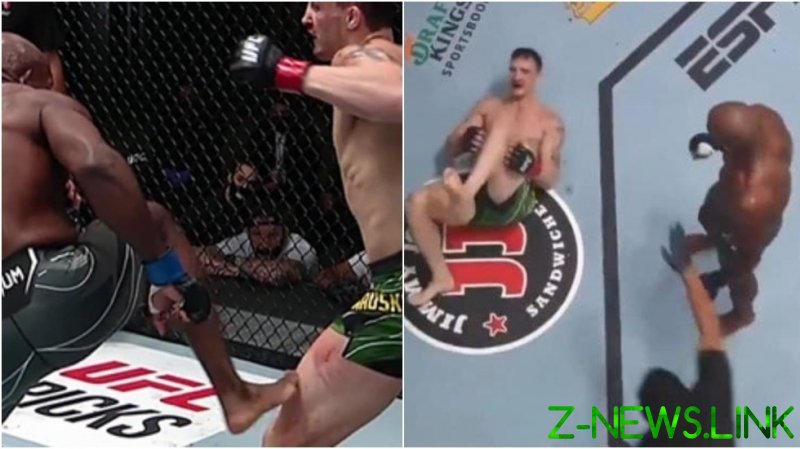 Getting back on track in the sport’s most elite championship following three defeats in his last four outings, the American improved his record to 9-5.

Spotting his moment halfway through the second round of his scrap with Modestas Bukauskas, who fell to 11-5, ‘The War Horse’ struck with an oblique kick believed to be the first of its nature to end a fight in the history of the UFC.

One sharer of the footage assumed he had torn the Lithuanian-born Brit’s MCL, ACL and PCL with “a possible avulsion fracture of his tibia”.

And as revealed in his post-bout interview with Michael Bisping, this was all in the script.

“I didn’t work it in training camp with the intent that I had and threw it with today, because I don’t want to hurt my training partners,” revealed Rountree.

“I knew when he threw a jab he was very heavy on the front foot. That’s when I threw it and that’s when it landed.”

“My mindset today was just win,” the LA native went on.

“Win the fight. I don’t care. I’m not hiding anymore. I’m dealing with my fear head-on. I just knew I had to come in here and just get the job done.”

Later, after also visiting him backstage, he took to Twitter to send “positive thoughts for my opponent Modestas Bukauskas”.

“I hope he heals up quickly. He will be back. Thanks for the support. I needed that win,” Rountree signed off.

On the same medium, though, pundits and fans reacted to the “brutal” showstopper.

“Khalil Rountree was on a mission to save his job and did it violently,” remarked one of the former party.

“Jon Jones has spent the last 10 years trying to finish people with the oblique kick,” pointed out an MMA account.

“Khalil Rountree does it in seven minutes.”

“Khalil Rountree either looks like he can go toe to toe with Thanos himself or looks like he couldn’t go two rounds with Tony Stark without the armor. There is no in-between,” concluded another.

Not everyone was impressed by his display, though.

Over on Instagram, there was a pile-on with fellow MMA stars such as Marion Reneau joining calls for the move to be banned.

“Disgusting sh*t,” Joe Schilling branded it, while Michael Johnson said Rountree “should be banned for sure”.

“It’s cheap bullshit. Then to brag about it is a bit trash,” the lightweight concluded.