‘Disgraceful’: Fans hit out at Son for celebrating goal shortly after medical emergency at Newcastle-Tottenham match 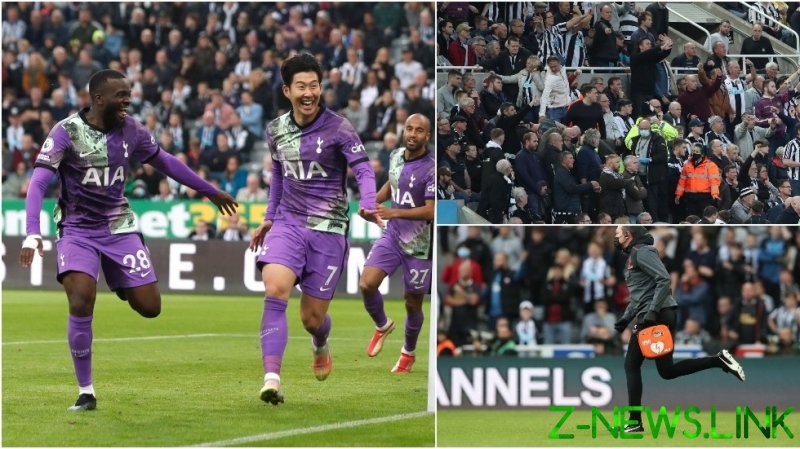 In the struggling northeast English outfit’s first match since being taken over by the Saudi Public Investment Fund, all was going well for the home side when Callum Wilson put them ahead on two minutes.

Their bliss lasted for just a quarter of an hour, however, as Tanguy Ndombele leveled the score on 17 minutes and England captain Harry Kane put the visitors ahead just five minutes later.

In the crowd, the afternoon soured even further when a medical emergency struck.

Approaching half time, Spurs players such as Sergio Reguilon desperately gestured for medics to rush to a scene in the stands while both teams were allowed to have a drinks break by referee Andre Marriner before he ordered them into their dressing rooms.

Spurs’ star Eric Dier was seen gesturing for a defibrillator device to be used, as players earned praise for their rapid reaction to the concerning scenes.

Meanwhile, Newcastle’s social media accounts updated fans with a message that explained how “the supporter who was in need of urgent medical assistance has been stabilized and is on their way to hospital”.

“Our thoughts are with them,” it was added.

Play eventually resumed around 10 minutes later, with seven added on as stoppage time.

On 49 minutes, Son went some way to sealing the points when being set up by the Kane, and was later blasted online for celebrating his goal considering the events that had unfolded not long previously.

Twitter users called his decision to commemorate “weird” and said the “pathetic” Korean was a “disgrace” who had “zero shame”.

“Not going to lie, I thought Son would have shown some respect by not celebrating,” it was admitted by one party, in a nod to how the squeaky clean 29-year-old who still lives with his parents usually conducts himself.

A well-followed account holder admitted that he had “no idea how to feel” after the goal.

“Son celebrating like that is a bit disrespectful, no?” it was asked in reply.

“Why are people giving out about Son celebrating?,” asked someone in his defense, however.

As it turned out, Son’s strike was the deciding factor in the fixture that ended 3-2 via an 89th minute Dier own goal, with Spurs now occupying fifth place in the Premier League table on 15 points, level with Brighton above them and four behind leader rivals Chelsea.

Still winless this term, Newcastle have just three points to their name and are stuck second from bottom in the relegation zone.