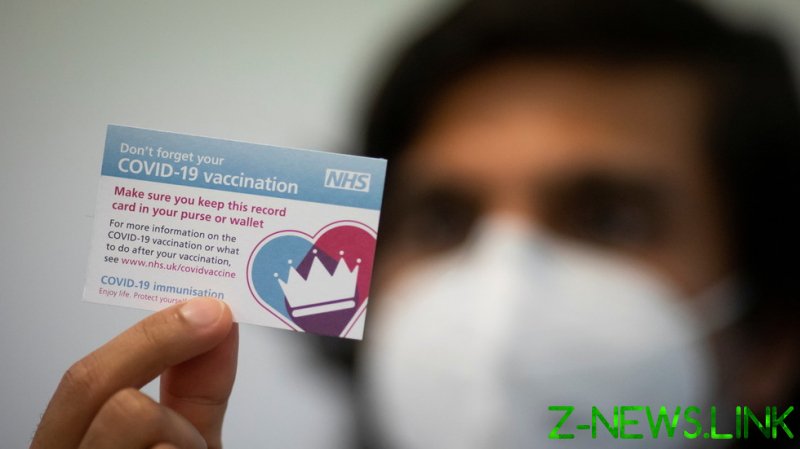 Vaccines Minister Nadhim Zahawi said on Monday that the government had “no plans” to roll out an ID that could be used to determine if someone had received a coronavirus jab, and added there was no discussion about imposing penalties on those who choose not to be inoculated.

“I think mandating vaccinations is discriminatory and completely wrong… and I would urge businesses listening to this debate today not to even think about this,” Zahawi said.

Although the minister stressed that there were “currently no plans” for restrictions or passports, the government’s official response to the petition was interpreted by some as worryingly vague.

Describing vaccination as “the most effective and crucial public health intervention” after clean water, the Department of Health and Social Care wrote that it is “everyone’s responsibility to do the right thing for their own health, and for the benefit of the wider community.” The department added that “the Government will carefully consider all options to improve vaccination rates, should that be necessary.”

Zahawi had earlier said that the government was looking into the possibility of creating immunity passports, noting that businesses – some of which already use the NHS Test and Trace app – would probably embrace such a system.

Last week, the UK began administering the Pfizer-BioNTech Covid-19 vaccine to the public, giving hope to many that the health crisis could be nearing an end, but also raising concerns that the jab could become mandatory. Some governments have already signalled penalties for those who refuse to be inoculated. Ontario, Canada’s Health Minister Christine Elliott has cautioned that the coronavirus vaccine won’t be mandatory, but said those who refuse it could be deprived of certain freedoms, such as the right to travel.