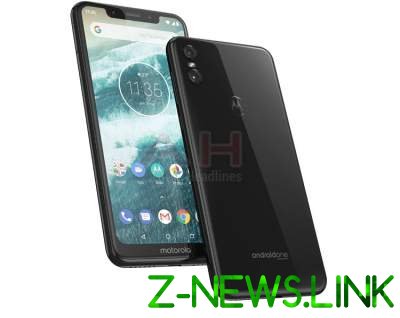 Preparing to release a smartphone Motorola One Power, equipped with a 6.2-inch display and a Qualcomm Snapdragon processor 636.

It is now known that this device could debut in a pair of model Motorola One.

Available network sources turned out to be renders of Motorola One. The image suggests that the smartphone is endowed with a display with a cutout in the upper part, which houses the front facing camera.

In the upper left corner of the rear panel is fitted with dual camera. Optical blocks are placed vertically between them is the led flash.

In addition, the back has a logo, in which, apparently, is hidden fingerprint scanner for biometric user identification by fingerprints.

Overall, in terms of design the Motorola One model is virtually identical to the One Motorola device Power. The technical characteristics are not disclosed yet, but we know that it will be released on the market in several colors, particularly in black and white.

Earlier it was reported that Motorola outlined at the August 2 presentation, which will be held in Chicago (USA). Apparently, this event will debut the Motorola One Motorola and One Power.