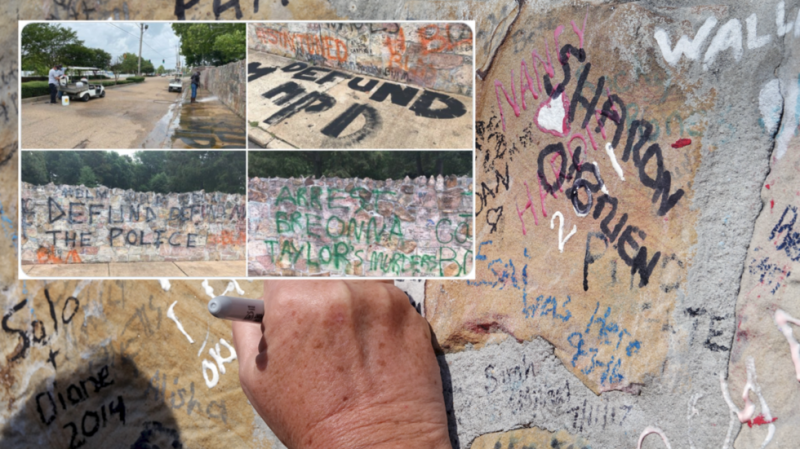 The walls outside the King’s former Tennessee mansion turned-museum, where he lived for 20 years before his death in August 1977, were covered in thick black and orange lettering in the early hours of Tuesday morning.

Normally covered with thousands of tributes to the King left by fans over the years as they lined up to enter the site, located on Elvis Presley Boulevard, the politically-charged defacement included messages like “Defund MPD,” and “F**k Trump.”

“[This is] one of the saddest days of my life. I mean, besides the day that Elvis passed away, this right here is right up next to it,” said Bill Stanley, Elvis’ stepbrother.

Needless to say, fans of the King were irate at the perceived desecration of the site, with some facetiously suggesting that Graceland be moved out of Memphis, while others called for the vandals to face swift justice.

Not everyone was outraged, however, with Democratic State Rep. Antonio Parkinson suggesting on Facebook it was the messaging, not the act, that had upset people.

“What’s the real issue here? Every visitor that has come to Graceland has written on that wall and there were no complaints. So, really, it’s WHAT was written, not the fact that it was written,” Parkinson said.

Parkinson was not alone as others chimed in saying it was the message, not the graffiti, that people were complaining about.

Meanwhile, Graceland wasn’t the only Elvis-linked site to be tagged with graffiti. The Levitt Shell concert venue, the site of Elvis’ first paid concert July 30, 1954 in Overton Park, was also defaced with slogans such as “EAT THE RICH,” “F**K TRUMP,” and “F**K STRICKLAND,” in reference to Memphis Mayor Jim Strickland.

The ‘I (Heart) Memphis’ mural on Cooper Avenue at York was also covered in similar, spray-painted messages.

The vandalism appeared at a time of heightened racial tensions across the US after a number of high-profile police shootings of black men in recent months, which in turn led to violence, looting, and rioting in several cities.

Graceland has been a flashpoint for racial tensions and BLM activism in the past, and the museum has faced accusations of discrimination in the past.