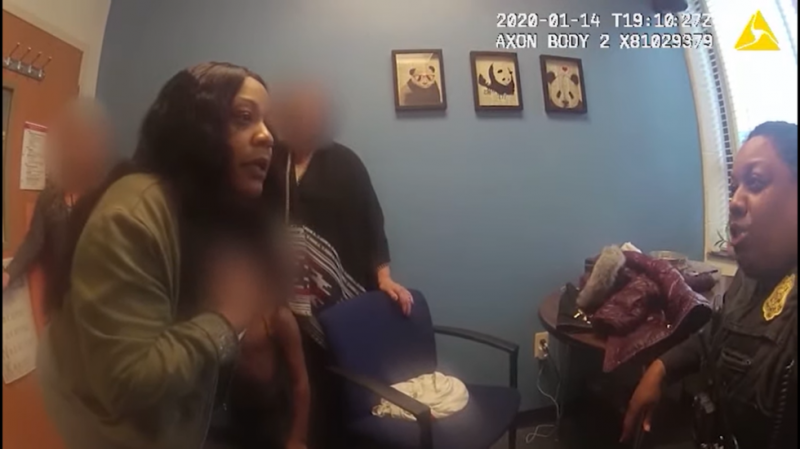 The 50-minute video – of the January 2020 incident – released on Friday by the Montgomery County Police Department in Maryland shows officers aggressively hovering over and berating the unidentified child for reportedly leaving school without permission.

The child becomes inconsolable as the two officers repeatedly tell him he was “bad” and wondering whether his mother would let them “spank” him. They later tell his mother that they “wish” she would beat him.

While waiting for the child’s mother after taking him back to school in the back of their patrol car, one officer moves inches from his face and screams at him, saying, “Oh, my God, I’d beat him so bad. You do not embarrass me like this at school.”

Later, the other officer puts his handcuffs around the child’s wrists, telling him they were for “people that don’t want to listen and don’t know how to act.”

Shanta Grant, the boy’s mother, filed a lawsuit earlier this year against the County, its public school system and police department.

In a statement, lawyers representing the family said the child was treated “as if he were a hardened criminal” and that Grant was seeking “justice and fair compensation for the trauma he endured.”

Describing the video as “extremely difficult” to watch, the school system said in a statement that there was “no excuse for adults to ever speak to or threaten a child in this way.”

A police department statement confirmed that both officers, whose identities have not been made public, remain employed after an internal investigation was conducted. Under Maryland law, those findings are confidential.

County council member Will Jawando said the video made him “sick.”

“I watched in horror as what can only be described as a nightmare unfolded for nearly an hour,” Jawando said in a tweeted statement.

“We all saw a little boy be mocked, degraded, put in the seat of a police car, screamed at from the top of an adult police officer’s lungs, inches from his face. This is violence,” Jawando said.

Nearly 500 people have signed an open letter calling for the officers to be fired and for the education board to conduct a review of procedures for when police interact with students in schools.

“The incident made national news, but over a year later, it has not been fully addressed. This delay in accountability is unjustifiable and unacceptable,” community organizers note in the letter.

Civil rights attorney Judith Brown Dianis tweeted that the video was “Exhibit #1 of why cops don’t belong around our children.”

The majority of social media users agree that the officers “need to be fired.” Some have also questioned whether the school officials involved are going to be held responsible.