Die Antwoord will perform in Ukraine 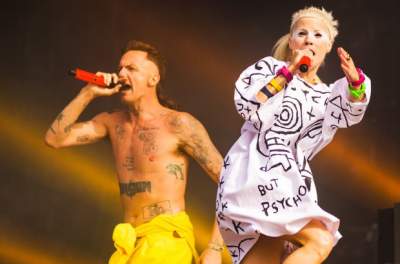 This summer the group will participate in the festival.

Popular African group Die Antwoord was headlining UPark Festival 2019. They will be performing on the last day of the festival on 18 July.

“To close the festival this summer will be the stars of the South African hip-hop and one of the most provocative bands of our time Die Antwoord. Their last performance in Kyiv broke off pieces and gave to clearly understand what a real rave”.

It is worth noting that the festival UPark in 2019 will be held from 16 to 18 July in the Sky Family Park. Among other artists: Nothing But Thieves, Bring Me The Horizon, SWMRS, Pale Waves, Rag’n’bone Man, Thirty Seconds to Mars and MØ.

The headliner UPark Festival in July was to be the band The Prodigy. However, its vocalist Keith flint died March 4 in his home. Because of the death of the musician group has canceled all performances, including the Kiev festival.

Die Antwoord – rave group from Cape town. Performers became popular after the release of the debut video Enter the Ninja. The band released 4 albums, the last titled “27” that came out in 2018.