Dictator’s ‘throne’: Hitler’s toilet seat, looted from Bavarian retreat, up for grabs with starting bid of $5,000 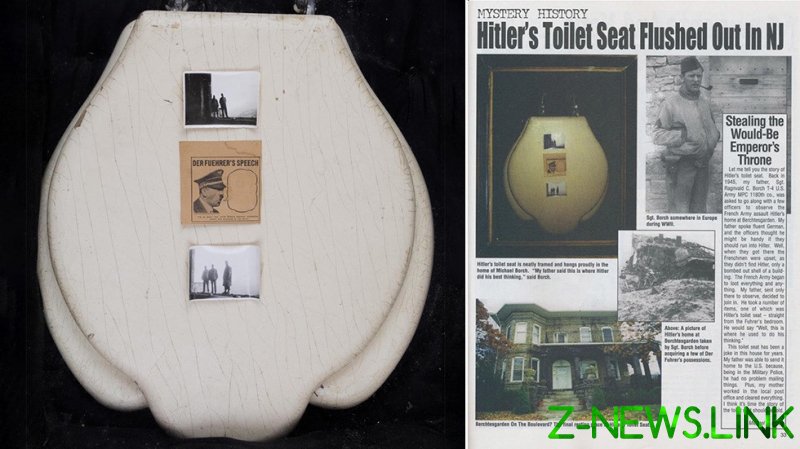 According to the lot description, the weird memorabilia comes from the Berghof residence in Berchtesgaden. A US soldier named Ragnvald C. Borch was a liaison with the French 2nd Armored Division and became one of the first Allied troops to reach the building in early May of 1945.

By this time, Hitler himself was already dead and his residence was heavily damaged by bombings and a fire set by retreating Nazi soldiers, but some of his things remained intact and were plundered.

Borch’s share of the loot were a couple of oil paintings, a World War I armored vest and the toilet seat. According to the family legend conveyed by his son Michael, when a fellow military police trooper asked him why he wanted the latter trophy, he responded: “Where do you think Hitler put his ass?”

The two-piece seat and lid along with other “souvenirs” were sent back to Borch’s wife and remained on display in the basement of his home in New Jersey. The local media wrote about it, as evidenced by a newspaper clipping that is offered along with some wartime photos of Borch and other memorabilia as part of the same lot.

Admittedly the relic of Nazi downfall didn’t get the same attention as the infamous ‘Hitler’s toilet’, which was taken from the scrapped aviso ship ‘Grille’ and ended up in a New Jersey gas station. But the saleroom Alexander Auctions says their offer is a “one-of-a-kind piece,” unlike the toilet, which was perhaps one of a dozen installed on the yacht.

“This example was from Hitler’s personal bathroom, from as close to a ‘throne’ as the dictator would ever get,” it said.

Whether the uniqueness appeal is strong enough for someone to blow at least $5,000 on the seat remains to be seen. An earlier attempt by the same auction house to sell the bar from ‘Grille’ was not successful. Sellers hoped to get at least $150,000 for the globe-shaped piece of fuehrer furniture, but no bid was made on it.