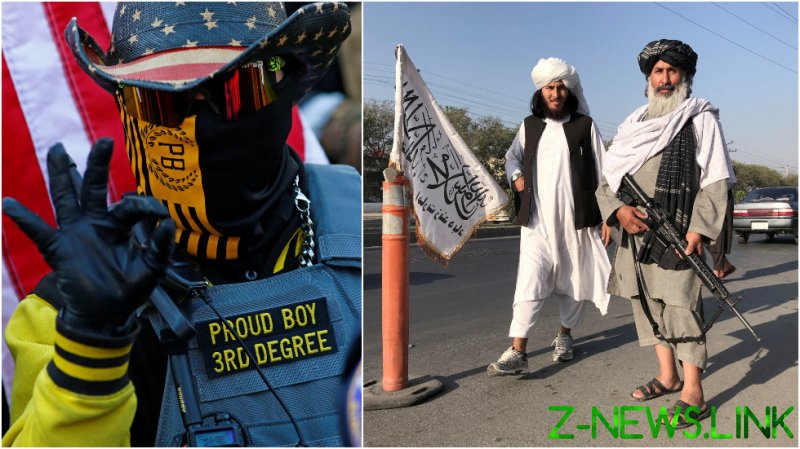 “White supremacist and anti-government extremists have expressed admiration for what the Taliban accomplished, a worrying development for US officials who have been grappling with the threat of domestic violent extremism,” CNN reported on Wednesday afternoon.

Only one official is mentioned by name, however – John Cohen of the Office of Intelligence and Analysis at the Department of Homeland Security. His concern came from a teleconference call with law enforcement on Friday, which CNN says it obtained, when Cohen said these groups were “framing the activities of the Taliban as a success.”

Another source for the story is SITE Intelligence Group, a NGO run by professional “extremist tracker” Rita Katz. Their August 26 weekly bulletin contains a single quote by an anonymous person on a Telegram channel praising “farmers and minimally trained men” who fought to “take back their nation back from globohomo.”

“If white men in the west had the same courage as the Taliban, we would not be ruled by Jews currently,” the quote goes on to say.

Joanna Mendelson, associate director of the Anti-Defamation League’s Center on Extremism, also makes an appearance in the CNN story. While the ADL hasn’t seen any “observed credible threats, or mobilization of online extremist activity,” they are “concerned” about current online rhetoric.

“The fact that the Taliban at the end of the day could claim victory over such a world power is something that White supremacists are taking note of,” Mendelson told CNN.

The story also quotes two unnamed federal officials, one from law enforcement and another from DHS, speculating that this “hateful rhetoric” might lead to violence against Afghan refugees currently being flown to the US for resettlement, after the Taliban takeover.

The US-backed Afghan government collapsed practically overnight and surrendered its Pentagon-funded military to the Taliban without a fight in mid-August. This led to a frantic scramble by tens of thousands of people to flee Kabul via the airport, controlled by US troops.

Biden himself has praised the Kabul airlift as an “extraordinary success” and argued ending the 20-year war was the right thing to do. Meanwhile, the Taliban have been parading their captured US hardware and weapons around Kabul, Kandahar and other Afghan cities.

Amid the retreat, some critics of the US establishment have warned that the embarrassed White House might turn inward to avenge its humiliation.

The Biden administration has been arguing that “white supremacy” and “domestic extremism” are the greatest threat to the US government ever since the January 6 riot at the US Capitol. They’ve persistently called the event an “insurrection” against the US, even though no one has been charged with such a crime, and the FBI recently admitted it wasn’t an organized coup attempt.