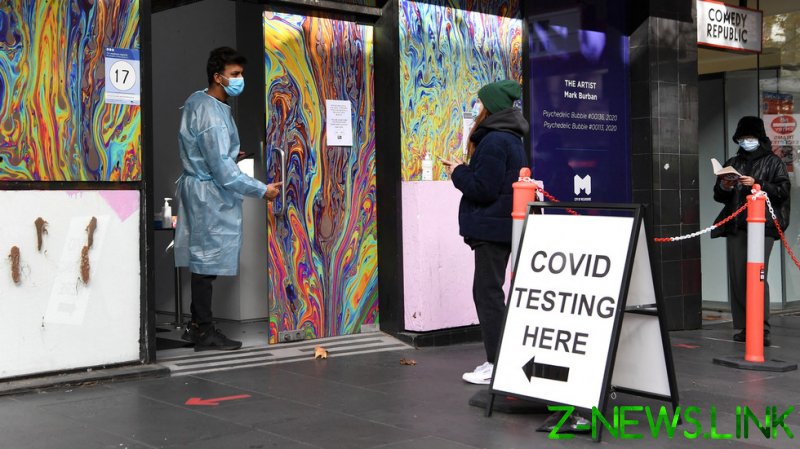 Earlier this week, a packed school bus full of frightened children was pulled over by police, everyone was told to stay on board, and the familiar blue-and-white tape encircled the vehicle as officers decided how to tackle what must have appeared to onlookers to be a serious crime scene.

But instead of terrorists, illegal immigrants or drug smugglers, police in South Australia were looking for two schoolgirls who had hitchhiked from the neighbouring state of Victoria to meet up with a friend and sneak aboard the bus, mingling with those already on board.

In what might have passed off as an adventurous schoolgirl jaunt in normal times, the pair were pursued as wanted felons. Their crime? They had broken Covid-19 lockdown restrictions and left their home state.

Once identified among the ranks of 36 schoolkids, they were promptly detained, then tested for coronavirus. Both returned negative results.

This incident may seem like a quirky Aussie comedy, but at the other end of the humour scale, there was the heartbreaking tale of eight-year-old Cooper Onyett, also from Victoria, who drowned while on his first-ever overnight school camp just over a week ago.

Cold-hearted bureaucrats citing ‘public health’ refused his grieving family their request to hold a larger funeral service than that limited to just the 10 people the law allows.

These real-life experiences are what happens when paranoia, alarm and ignorance take hold of the public imagination, and that wild-eyed hysteria has been reinforced by Australia’s health officials via their imposition of a seven-day ‘circuit breaker’ lockdown in Victoria on Thursday.

The latest measures mean Victoria’s nearly seven million residents can leave their homes only for essential work, healthcare, grocery shopping, exercise or to get a coronavirus vaccination, all of that thanks to the number of infections surging to… 26.

There have been 3.5 million deaths from Covid-19 across the world, but swift contact tracing, snap lockdowns and strict social distancing rules have helped Australia keep its Covid-19 numbers relatively low, with just over 30,000 cases and 910 deaths in total. But at what cost?

Victorians are sick of lockdowns and sick of being told what to do. And further evidence of that is the increasing vaccine hesitancy that is gripping the nation, as distrust of politicians spreads to their immunisation programme and the regularly breached quarantine scheme in place.

Moreover, my family members there tell me they’re sick of being made to feel like ‘dirty Victorians’, locked down in their homes while, elsewhere across the country, sporting fixtures are in full flow and people are free to enjoy the great outdoors, and to shop, drink and eat out whenever they choose.

Aussies are a territorial bunch. The land borders between the mainland states and territories are not taken lightly, like the regional divides in Europe are – they barely merit a mention as signs welcoming travellers to Bordeaux or Bavaria whiz by.

Growing up in my native Victoria, if family holidays ever took us across the state border, we knew we were entering ‘enemy territory’ because we would have to run the gauntlet of the fruit fly (Bactrocera tryoni) inspector.

Wearing readily identifiable green suits, these no-joke jokers would pull over a car and, as they took note of its occupants, demand to know if any of the passengers was carrying fruit. If so, it was seized immediately and discarded in a large green bin before the travellers were waved through to continue their journey safely. And fly-free.

It always seemed excessive. After all, flies fly. They didn’t need us to smuggle them across the border inside our Victorian oranges when they could have buzzed across under their own steam.

Nowadays, the no-nonsense border forces set up shop in the airports of the island continent, and you can watch them reprimand and fine clueless foreigners bringing potentially contaminating meat and vegetables into the country on TV shows such as ‘Nothing To Declare’.

Australians are made to feel they are under siege. That foreign bugs and viruses are just waiting for a chance to mutate and spread uncontrollably, decimating the populations of our weird animals and destroying native plants and trees. And even us.

That’s why the public health officials spreading fear about the coronavirus pandemic have been so successful in Oz, because there’s always something out there looking to destroy our treasured way of life, we’re constantly warned.

But Aussies aren’t stupid. They can see that, while quarantine and lockdowns are effective in keeping down Covid-19 infections, with the tyranny of distance acting as a pretty effective natural barrier, and test and tracing in place, those harsher measures should surely be used only in extreme cases. And 26 new cases does not qualify as extreme.

Because if the day does come when Australia’s public health officials need to pull up the drawbridge and shut down the economy, locking everyone indoors, they’ll have a hard time convincing a weary population they must play ball yet again. Sceptical Aussies will simply ignore the authorities. And then what?