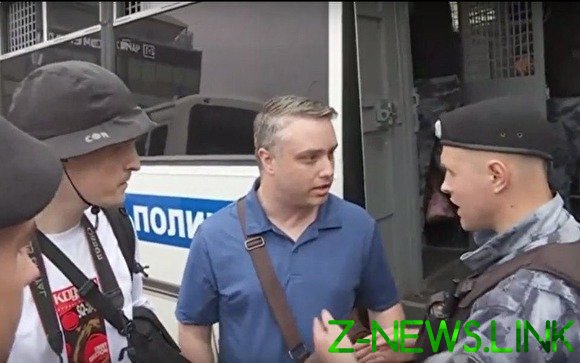 “Who is American brought?”

Arrested yesterday in Moscow at an unsanctioned March in support of journalists Meduza Ivan Golunova American riot police of Regardie refused to put in a paddy wagon and take it to the police, was an English teacher from Ekaterinburg Louis Marinelli. He really is a US citizen, in the middle of 2018 moved from California to the capital of the Urals, where he is engaged in teaching a foreign language in one of the private schools in the city.

That in Moscow arrested him, Marinelli confirmed on his page on the social network Facebook. “Good evening from Moscow. I’m glad writing this now in the comfort of home, while others may spend the night in a Moscow police station. Today was unauthorized political March in support of press freedom and specifically in support of the recently-concluded Russian journalist, who was released due to public protest. I participated in this March as an observer and eventually was taken into custody by the police. Fortunately, when they learned that I was a US citizen, they immediately released me. Video of the moment became popular in Russia. Police were not injured, including those not affected it from me,” wrote an American.

Video of the detention Marinelli, indeed, was extremely popular. 15-second snippet captured two men standing surrounded by fighters of special troops of Regardie the paddy wagon. “I’m American”, — says one of the detainees in a blue Polo shirt and pokes a finger. “American?”, obviously taken aback, asks him one of the Riot police. And not listening to the answer, immediately turns to colleagues: “the American Who brought?”. Then as well, without any pauses, adds: “American-free”. And pushes his hand out.

Action in support of journalist Ivan Golunova, which tried to blame the manufacture and distribution of drugs, held in Moscow on June 12, Russia Day, near the metro station “Pure ponds”. The event was planned before the release of the journalist, which took place on 11 June under pressure from the public. However, Moscow authorities have not agreed on the March. However, people decided to go out, spoke out against the lawlessness of security forces. On “Pure ponds” received more than 1.5 thousand people (according to the interior Ministry — 1,200).

The police and Regardie rigidly detained participants of the action. According to “OVD-info”, all were detained more than 500 people. Among them were journalists of “Novaya Gazeta”, “echo of Moscow”, “Kommersant”, “the Tape.ru” The Village, “MBH media” and other media. Also, the police Department was delivered to the oppositionist Alexei Navalny.

Today, the Moscow Central Board have informed that Department of the Moscow police released almost all the detainees. According to authorities, police stations this morning had only four people.