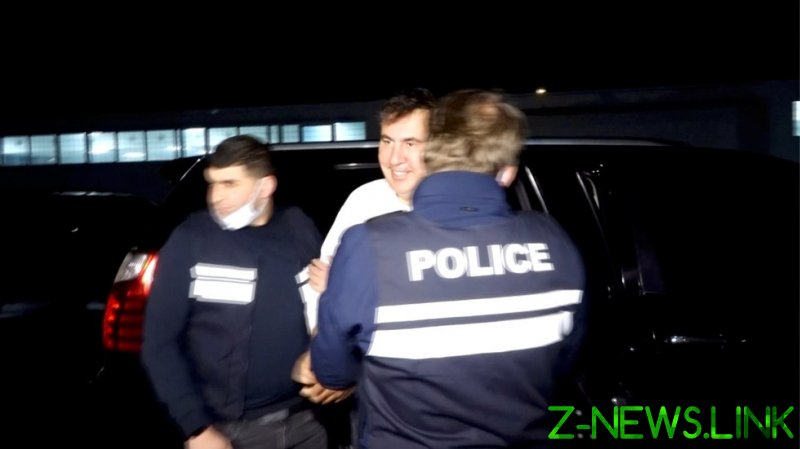 Saakashvili’s coming to Georgia was widely perceived as a game of dare with the authorities, as he had several convictions in absentia on charges of abuse of power. However, Georgian Dream leader Irakli Kobakhidze said the police had a more urgent reason for detaining the controversial politician, as he had allegedly returned for the sole purpose of staging a coup.

“He came to Georgia to carry out his threats to overthrow the government. Accordingly, the law enforcement authorities took all the measures necessary to prevent his new crime,” Kobakhidze said on Saturday.

Saakashvili, who left Georgia in 2013, abruptly returned to the country as it was holding local elections, releasing a video address in which he called on his supporters not to go to the polling stations, and to attend a rally in the capital, Tbilisi, the following day.

“If there are 100,000 of us, no one will be able to defeat us, and Georgia will get back onto the path of development. This misery and horror will come to an end,” Saakashvili said in his address.

The former president, who has been the subject of multiple criminal cases and who was sentenced in his absence to a total of nine years behind bars, was apprehended by law enforcement agents shortly after his arrival. The party he founded, the National Movement, did not fare well in the polls, with early projections predicting it would gain only 27% of votes and Georgian Dream 47%.

Georgia’s incumbent president, Salome Zourabichvili, has ruled out any possibility of a pardon for the politician, stating that it would be “unjust” for the victims of his regime.

“Everyone is equal before the law. Many people ask whether the president will pardon Saakashvili. The answer is a simple one: no, never,” she told a press briefing late on Friday.

Saakashvili was taken to a correctional facility in the city of Rustavi, with the nation’s prosecutors vowing he would spend at least six years behind bars. He is now being investigated on a new criminal matter, as he allegedly entered the country illegally, having forfeited his Georgian nationality back in 2015, when he was granted Ukrainian citizenship.