Home / WORLD / Despite opposition from Republican voters, Juneteenth platitudes pour in from all sides 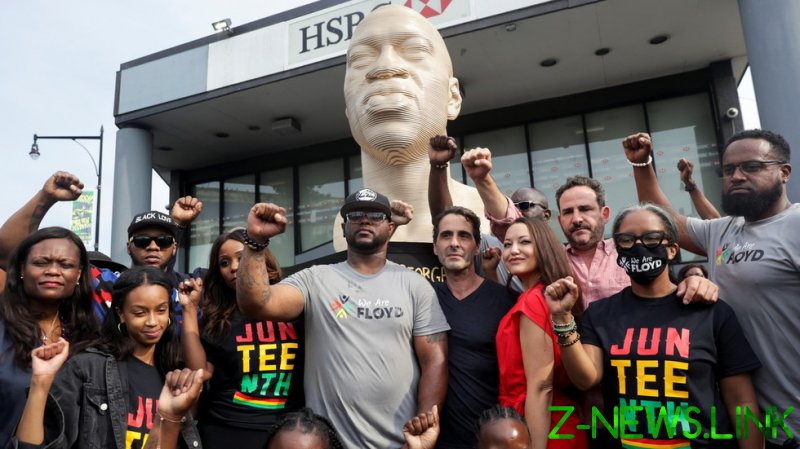 After a unanimous vote in the Senate and a 415-14 vote in the House, President Joe Biden officially recognized June 19 – ‘Juneteenth’ – as a federal holiday on Thursday. Once a regional celebration unique to Texas, the date has been recognized in some capacity by 46 states since the 1980s, and commemorates the day – June 19, 1865 – that the last slaves in the south learned of their freedom after the Civil War.

Glancing at social media, one would think that Republicans and Democrats had put their differences aside in marking the occasion. However, lawmakers’ messages were split along partisan lines. Democrats hailed the day as another landmark on the path toward racial “equity” in the US, and used the occasion to promote race-focused bills and other partisan legislation.

Republicans – who overwhelmingly backed the establishment of the holiday – portrayed the day as a “celebration of freedom,” and avoided the racially charged calls to action of their Democrat colleagues.

Steering clear of these calls was probably a wise strategy for the GOP. A poll taken earlier this month found that only 7% of Republican voters supported making Juneteenth a national holiday, compared to 57% of Democrats. And no matter how Republicans in Congress wrapped it up, even middle-of-the-road conservative pundits spoke out against the holiday.

“America only has one Independence Day and it’s on July 4th, 1776,” conservative activist Charlie Kirk tweeted on Thursday. “We now have 2 summer holidays – and one of them based on race,” he tweeted earlier that day. “Shame on the GOP for supporting this.”

Candace Owens, a prominent black conservative, caused a stir on Thursday when she declared the holiday a Democrat effort to “repackage segregation” and said she’d be “celebrating July 4th and July 4th only.”

The wording of the act signed by Biden irked some conservatives, too. They saw the name – the ‘Juneteenth National Independence Day Act’ – as an attempt to supplant Independence Day on the national calendar.