Home / WORLD / Derided as scammers, new party that wants to split England in two may have an important message on federalism and socialism

Derided as scammers, new party that wants to split England in two may have an important message on federalism and socialism 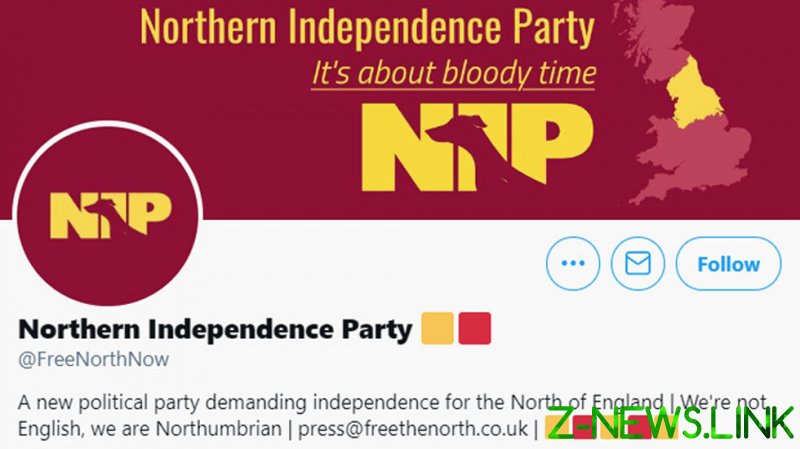 Boris Johnson is battling to keep the UK intact at next month’s local elections. Scottish and Welsh independence movements are firmly entrenched in the mainstream. Now another party wants to annex the northern part of England known as Northumbria, once an Anglo-Saxon kingdom.

The Northern Independence Party (NIP) was formed six months ago and has managed to attract a growing supporter base, with 60,000 followers on Twitter and 13,500 on Facebook.

Some political commentators dismiss them as a joke outfit, due to their logo featuring the whippet, a greyhound-like dog breed that is thought to have originated in the north of England. It has also been responsible for some light-hearted social media posts involving Game of Thrones actor Sean Bean, who hails from the city of Sheffield.

But things became more serious when Thelma Walker confirmed she had joined the NIP and was standing in the Hartlepool by-election for the Westminster Parliament. The race will be a key gauge of the current British political climate, following the resignation of Labour MP Mike Hill. Walker’s defection from Labour was eyebrow-raising, as she was previously MP for Colne Valley until 2019.

Her former party has traditionally been the choice of the working class in the UK, but that changed dramatically in the 2019 general election, when Walker and many colleagues lost their seats as Labour became detached from its base. Now she thinks the NIP can claim that space.

Speaking to RT, Walker said, “In 2017, the Labour manifesto had the right policies, it was true democratic socialism and I won the seat based largely on those polices. Those policies have been seen and can’t be unseen.”

The elephant in the room is that although the NIP has adopted many of those policies, it also plans to create a new state by holding a referendum. But Walker feels that isn’t the current priority.

She explained, “People joked about the SNP [Scottish National Party] and look what’s happening or could happen in the next year or two. So never say never, but independence may be a long way along the road and would require a referendum anyway.

“For me, the desired goal in the nearer future is federalism, which works in Germany. I went over there when I was an MP and saw how the model works where people have control of their local economy. That’s what first drew me to the NIP.

“I’m a true Northerner. I was born in Manchester and lived in West Yorkshire for 30 years, and up north we’re fed up with what I call the crumbs from the Westminster table. We’ve got queues at food banks, shops closed up, we’re seeing life expectancy going down and child poverty going up.

“I’m not saying there isn’t deprivation around the country, but my concern primarily at the moment is to end the north/south divide and for Hartlepool to have control of its own local economy. Federalism, regionalism and localism: that’s what I want.”

This aligns with the view of the director-general of the Confederation of British Industry, Tony Danker, who has called for firms to build “clusters of expertise” and invest outside of London and England’s south-east.

Walker has been pleased with the amount of bite back she has received from political rivals. She feels it indicates the NIP is gaining ground. She continued, “If we weren’t a threat, we wouldn’t be getting the response we are.

“Labour has described us as a scam political party but our membership is going through the roof – not just from people who live up north, but across the country, Northerners who’ve had to leave because the employment is often down south or in London. The voice of the north is being heard through this campaign.”

But being solely focused on the north has been an issue for the NIP. The founder, Philip Proudfoot – who would not agree to being interviewed by RT – lives in Brighton on the south coast for work reasons, and vice chair Meredith Knowles resides in Chicago. Another setback was the new party missed a registration deadline for the by-election, so Walker will technically be classed as an independent on the ballot.

One thing clearly in its favour, though, is the appetite for democratic socialism, as other left-wingers join the NIP in a coalition. This is being driven largely by the elitism of the current Conservative government led by Boris Johnson, several of whom went to schools like Eton or Harrow and attended either Oxford or Cambridge.

Walker added, “They are so far removed from ordinary people and the poverty of people working all the hours in insecure employment. They say they understand and say they are addressing the issues, but the north has waited a long time to get proper investment and it’s not happened.

“People are struggling; you have families choosing between heating their house and feeding their kids. They [the Tories] don’t have a real understanding of the forgotten, left-behind towns and the working-class struggle.

“I’ve been engaging behind the scenes with smaller left-wing parties and campaigns like the Breakthrough Party and Left Unity – my vision is for a coalition of the left which is bigger than the Labour Party.”

Last week, the NIP released its manifesto. It aims to provide free school meals for all, expand renters’ rights, increase social care funding and decriminalise sex work. It is also strongly behind decriminalising cannabis, and a new YouGov poll suggests this is supported by more than half of the UK’s population. Walker said, “This is just the first step in terms of legalising cannabis, I have to say it’s a very popular policy and just one example of early intervention.

“I was so disappointed when [Labour leader] Keir Starmer visited Hartlepool and was talking about getting more police to sort out anti-social behaviour. I’m not condoning it, but it’s cause and effect. We’ve lost our youth clubs, Sure Start centres have been closed down, local government funding has been massively cut, you’ve got families at food banks – all of this is stress on young people. They can’t see a future of any hope when there is no employment.”

As with any form of regionalism, one problem is that it can be viewed by some as an outlet for hostility towards people from other regions. But the NIP is adamant it is all about inclusion and diversity in terms of religion, gender and sexuality.

Walker said, “People are proud of where they are born. I can tell that with the people I’m talking to in Hartlepool; they’re proud of the place. There’s nothing wrong with that. It’s different to nationalism or bigotry, that’s not what NIP is about.

“The area across the north has a proud history of welcoming people from all over the world to our region and that would continue. It’s about celebrating what is great about a particular region and making sure it achieves its potential.”

It will be intriguing to see how the NIP fares in the upcoming election. Is it a passing fad or the beginning of a socialist revolution? That’s for the voters to decide, but Walker believes it can connect to the masses. She concluded, “We’re looking at quality of life and a life of dignity. It’s more than me and NIP, it’s a movement that is growing. I get the feeling we’ll do better than people originally thought we would. I think this could be the start of something big.”