Derek Chauvin sentenced to 22.5 YEARS in prison over murder of George Floyd 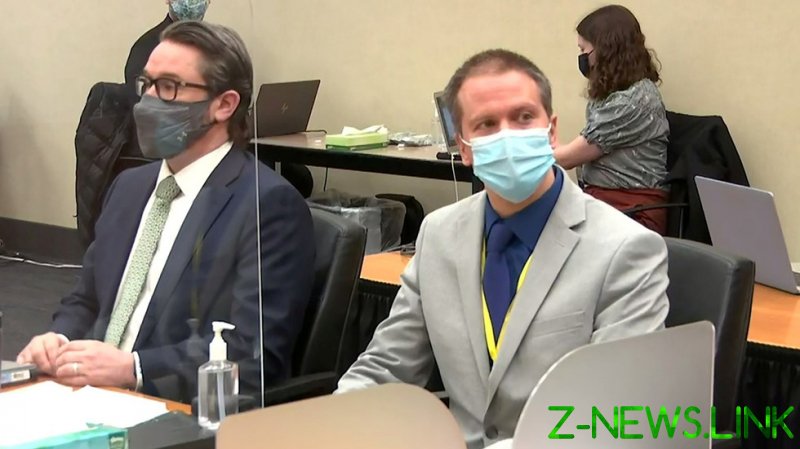 Pushing for the harshest possible sentence on Friday afternoon, prosecutor Matthew Frank told the Minneapolis court that this was “not the typical second degree unintentional murder.” Chauvin’s attorney Eric Nelson urged that justice should not be served according to “public opinion.”

The court heard victim impact statements from members of Floyd’s family, including his brother Terrence Floyd who addressed Chauvin directly, asking: “What was going through your head when you had your knee on my brother’s neck?” Floyd’s 7-year-old daughter Gianna appeared by video.

The court also heard from Chauvin’s mother, Carolyn Pawlenty, who said it was difficult for her to hear and read how the media, public and prosecution had portrayed her son. She described him as a “good man,” saying he had dedicated his life to the police department and urged a lighter sentence.

Chauvin stood to offer “condolences” to the Floyd family, but citing other legal matters, did not make a full statement.

The sentencing comes just two months after a jury declared him guilty of second-degree murder, third-degree murder, and second-degree manslaughter – all three charges stemming from the infamous encounter in which Chauvin knelt with his knee on Floyd’s neck for over nine minutes, horrifying onlookers. Chauvin has remained in a maximum security prison since his conviction.

The altercation was captured in cellphone footage and triggered a summer of widespread conflict between cops, anti-police-brutality protesters, opportunistic looters, and semi-professional troublemakers on both sides. Agitators even set up ‘autonomous zones’ in cities like Seattle, while other cities saw outbreaks of violence come and go.

The former officer, who was expelled from the force one day after Floyd’s murder, would typically face a sentence of about 12 and a half years in prison for such a crime, given he is a first-time offender. Prosecutors in the case requested a longer sentence, however, due to aggravating factors, including abuse of authority as an officer and the fact that children were present to witness the crime.

One of those present was then-17-year-old Darnella Frazier, who took out her phone to film the encounter – footage which became crucial for prosecutors making their case against the ex-cop.

Ruling on the aggravating factors in May, Hennepin County District Judge Peter Cahill said Chauvin treated Floyd with “particular cruelty” by failing to deliver medical assistance. Noting the “prolonged nature of the asphyxiation,” he pointed out that Floyd had pleaded that he couldn’t breathe at least 27 times during the ordeal.

Chauvin’s attorney Eric Nelson argued the state was unable to prove those aggravating factors existed at the time of Floyd’s death and cited “jury misconduct,” among other things, as a reason not to grant them.

Earlier on Friday, Cahill denied motions by Nelson for a new trial and hearings to examine the claim of juror misconduct.