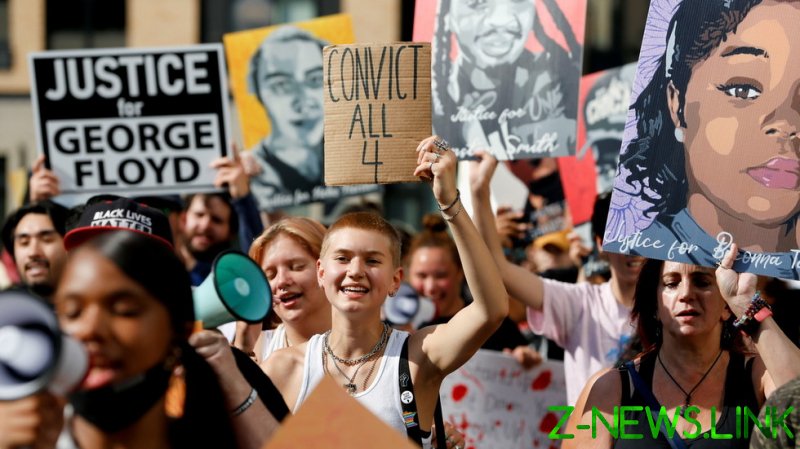 The four ex-cops pleaded “not guilty” in court on Tuesday. The former officers – Derek Chauvin, Tou Thao, J. Alexander Kueng and Thomas Lane – were charged by a federal jury back in May.

The defendants made their court appearance through a video link, with Chauvin communicating with the court from the Minneapolis maximum security prison. Back in June, Chauvin was sentenced to more than 22 years behind bars, after a jury found him guilty of murdering Floyd.

The four defendants stand accused of violating Floyd’s civil rights by allegedly denying him medical help. Chauvin is also accused of breaching Floyd’s constitutional rights to be free from unreasonable force by a police officer.

Thao and Kueng are also charged with violating Floyd’s rights to be free from unreasonable seizure and not intervening as Chauvin was kneeling on the man’s neck.

Meanwhile, Chauvin is also facing federal prosecution over an unrelated incident dating back to 2017, when he allegedly violated the civil rights of a 14-year-old boy during his arrest.

Lawyers representing Thao, Kueng and Lane asked the court to separate their clients’ trials from Chauvin’s, arguing the fact he had been already convicted might negatively impact the outcome of the trial.

“I can’t imagine something more prejudicial than a juror knowing one of these guys has already been convicted,” Lane’s attorney Earl Gray told the court. The judge, however, did not make an immediate decision on this motion.

Floyd died in the custody of the officers back in 2020, after the cops were called by a store clerk who suspected him of trying to use a counterfeit $20 bill. Footage of the arrest, with Chauvin kneeling on the neck of already restrained Floyd while the latter screamed he couldn’t breathe, reinvigorated debates about excessive use of force by the US police and alleged racial profiling.

The incident also sparked massive Black Lives Matter protests across the US and abroad, with some erupting in rioting, looting and arson.