Home / policy / Deputies of the Saratov regional Duma, a fight over the issue of violation of ethics

Deputies of the Saratov regional Duma, a fight over the issue of violation of ethics 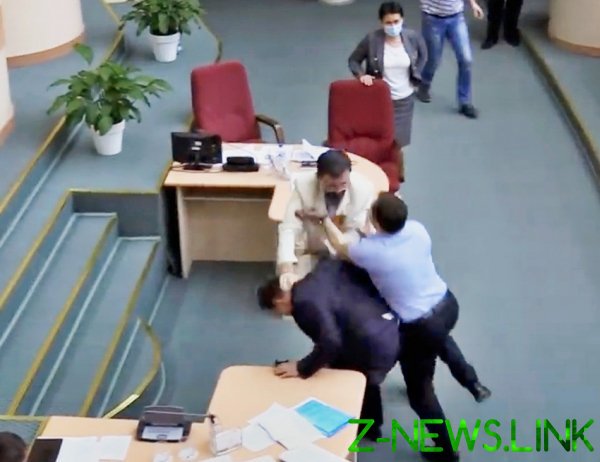 Two deputies accused of breach of parliamentary ethics. During the announcement of this decision, one of them began to remove the speaker on the phone. The argument escalated into pouring water and a fight.

At the meeting of the Saratov regional Duma deputies scuffled. Video of the brawl was published by the Agency “Version-Saratov” and the portal “Sarbc”.

The fight happened during a speech of head of the credentials Committee Nicholas Bushueva. He announced the decision about the violation of the deputies Dmitry Chernyshevsky (United Russia) and Nikolay Bondarenko (Communist party) of the rules of parliamentary ethics in the meetings of the committees of the Parliament.According to the speaker of regional Duma Alexander Romanov, the cause of the fight was the fact that deputies have “lost his nerve” because of the long work meeting went longer than 12 hours. “We have long worked. Deputies have handed over nerves. Each member has the right to state their position and passionately defend it. In communicating their positions to each other, apparently, some MPs did not cope with the emotional stress and in an ethical manner”, he said.

After the incident Bondarenko and Chernyshevsky was deprived of speech at the next meeting of Council. As reported by the RBC press-Secretary of the regional Parliament Stanislav Ivashchenko is the maximum punishment provided for the deputies. In addition, their behavior will evaluate the credentials Committee.

“According to regulations, the Deputy has no right to speak insulting words against other opponents and to commit acts that harm the honor Council and dignity of a Deputy,” — said Ivashchenko.

When Bushuev read the decision, Bondarenko stood up from his seat and started to remove it on mobile. Several deputies asked a colleague to return to the scene, but in the end the incident turned into dousing each other with water and a brawl.