Home / policy / Denmark is delaying the launch of “Nord stream-2”, and Brussels makes it unprofitable

Denmark is delaying the launch of “Nord stream-2”, and Brussels makes it unprofitable 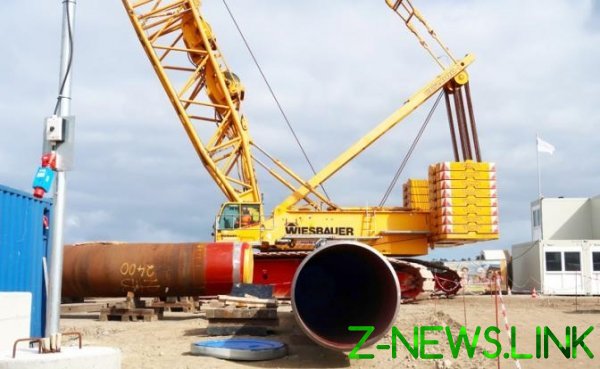 In “Gazprom” for the first time admitted the possibility of delays in the construction of “Nord stream-2” due to the fact that Denmark tighten the issuance of permits for laying the pipeline in its exclusive economic zone. Deputy head of Department of foreign economic activity of the holding Dmitry Khandoga reported that at the discretion of Copenhagen are just three applications, but no one never made a decision.

“At the moment, plans for the completion of the pipeline this year. Indeed, in late March, the Danish energy Agency has demanded from the project company to submit one application for passage of a route South of Bornholm island, April 15, the company filed the application. Thus, now before the Danish authorities are three bids on the route of laying pipeline in the territorial waters and the exclusive economic zone of Denmark. However, the company is working,” he said.

Handoga added that to date, laid more than 1,125 kilometres of pipeline in the Baltic sea. This is almost half of the total length of the two thread “Thread-2”. The company analyzes the impact of the results of the Danish resolution, working on the conservation measures of the project in the schedule.

“I can say that at the moment there is a risk that construction of the pipeline and start it before the end of the year,” concluded a top-the Manager “Gazprom”.

Although in General it is admitted the possibility of entry of the pipeline into operation in time, i.e. before the end of 2019, this is a significant change in the rhetoric. Previously, the company confidently declared that the implementation of the project is not in danger, including Denmark. The fact that under international law a country cannot refuse to grant permission to lay the pipeline in its exclusive economic zone. The catch is that the time of the application is not regulated.

The first application for a route through territorial waters “Gazprom” filed in the spring of 2017, in August of 2018 sent a second, in the economic area. And at the end of March 2019, the Danish energy Agency asked it to submit a third version of the route, which now also considers.

17 APR Nord Stream 2 has filed an appeal against the requirements of the DEA, but the appeal can consider a long time, so not the fact that it will speed up the process.

“The developer of the project, which is the company Nord Stream 2, it is difficult to understand why after 16 months from the date of entry into force of amendments to the law on the continental shelf is still missing any kind of decision on the basic route within the territorial waters of Denmark and why there is no decision on the route to the North-West of Bornholm in the absence of any objection from the point of view of ecology and safety. The requirement of filing according to the third embodiment of the route, despite the presence of two existing applications that have passed the review process and meet the conditions of authorization should be regarded only as a deliberate attempt to delay the completion of the project,” said Nord Stream 2.

The company stressed that such actions on the part of Danish authorities not only undermine the fundamental principles of legitimate expectations and legal certainty of the Danish Constitution and the European legislation, but also restrict the freedom of laying of pipelines on the seabed in accordance with the UN Convention (UNCLOS) of 1982.

Even if “Gazprom” will be able to deal with Denmark, the commissioning of the pipeline is questionable. As told to “SP” experts, the construction of the ground infrastructure on the territory of the host European countries until late and it is unlikely to be ready to receive gas by early 2020.

Furthermore, even if this could be resolved, there remains the problem of changes in the gas Directive. Recall that the European Commission has adopted amendments that allowed to extend the standards of the Third energy package and the “North stream-2”. This means that one company cannot be both the operator tube and the gas supplier. In addition, one supplier cannot use more than 50% of the capacity of the pipeline, the second half should be left for the “alternative” sellers of gas, even if not in principle. To make exceptions from this rule, as a continuation of the first Nord stream OPAL, but it will take more than one year.

Despite all these difficulties, in “Gazprom” continue to assure that the project will be profitable.

“Even if we assume that there will be a delay, the project will remain profitable because the life cycle of such projects is 25-30 years”, — said Dmitry Khandoga.

Changes in the terms — “even if they are” on the Economics of the project will not be affected, and the capacity of the pipeline in any case will be needed, he added.

However, given all these problems, the profitability of the “Nord stream-2” is increasingly called into question. Maybe for Europeans it will be more profitable than most “Gazprom”. Recently, the company announced that if the “Nord stream — 2” will start to work in 2020, the European gas consumers could save about 8 billion euros per year due to cheaper energy.

But the Europeans seem willing to sacrifice economic interests for the sake of politics — reducing the “gas dependence” of “Gazprom”, as well as transit through Ukraine. It is already clear that in view of these difficulties, Kiev will have to agree on the transit at least 2020 and likely later. The current transit contract expires at the end of this year.

Ukraine is in a transit negotiations were still set very constructively, pushing unrealistic demands like flow through its territory 100 billion cubic meters of gas under the current 80-90. The so-called Russian President Vladimir Putin even had to remind you that if through Ukraine will not transit, she, as it seems, is also left without gas.

“And if transit is not? You understand that there will be no reverse. Because the reverse, he’s virtual. Our gas that goes to Western Europe — gas pipeline from the Soviet era, how does it work? From the transit gas pipe coming branches all over Ukraine. This brand is known for professional things, the audience only it may not understand”, — said Putin.

Analyst group of companies “Finam” Alexey Kalachev believes that the position of Denmark is not the main problem of the “Nord stream-2”. She really can shift the timing, but it is not critical. But the Third energy package can really cause in the first years of the “Nord stream-2” will work almost in the negative.

— First, I note that the cost of laying pipes along the bottom of the Baltic sea is one thing, but all those pipes that come to the coast on our side, is another. They are not even included in calculations of profitability of the project. Stretching pipe across the country is pretty expensive, but it’s all about forget.

As to the latency of the pipeline construction, it is possible due to the fact that Denmark is considering for the third route option and may again delay the process for eight months. Then the work in this area simply do not have time to start on time. The cunning that they can’t deny it, so just hold harmonization, thereby putting deadlines at risk.

That is, the idea before the end of the year, the pipeline should have time to finish, but Denmark may be a delay of several months. As said the representative of “Gazprom”, it is not too impact on the profitability of the project, as it long-term.

The main problem with profitability did not occur because of Denmark, and later, when the pipeline is built and will start its operation. Here we meet the opposition of the amendments to the gas Directive, the notorious Third energy package. All that is valid in the European economy, must obey its principles, and one of them is the absence of monopoly. If there is a pipe, it must be accessible from other suppliers.

This requirement, naturally, does not like Gazprom, but from the point of view of a reasonable approach to a market economy, it is correct. The Third energy package, Gazprom may not be the operator of the tube that it builds. But the building has not formally Gazprom and the company Nord Stream AG, 2. Now it is hundred percent belongs to “Gazprom” because of the sanctions the rest of the European partners didn’t go in there. But they still continue to Fund this project and want to get revenue from it. So let them buy this company, and please, the division passed.

It is clear that if “Gazprom” though will remain a major energy company with more weight in Europe, such a lever of political influence, as it is now, already will not have. He will not be able to set prices for each customer, to enter into such long-term contracts, as it is now, and so forth, and he did not want to lose this influence.

“SP”: — Can the “Gazprom” just get to the “Nord stream-2” exclusion from the Third energy package, as in the case of OPAL?

— Yes, in principle, possible. But here again the question of profitability. To get exception, Gazprom will first have to hold his trumpet a year or more, half-empty. Then say that other vendors there, so you need to give the exception. Naturally, this will affect the payback.

In addition, for uncertain time will be extended Ukrainian transit. After all, if the pipe is to be used only in half power, the remaining gas will have to drive to Europe through Ukraine. And “Gazprom” would like to hurry to get away from the Ukrainian transit, as well as to ensure the return on your project.

Finally, as I understand it, the European partners will receive a return on their investment regardless of how much gas actually pumped through the tube. So it turns out that the pumping will be very expensive for Gazprom, if to use a tube half-heartedly.