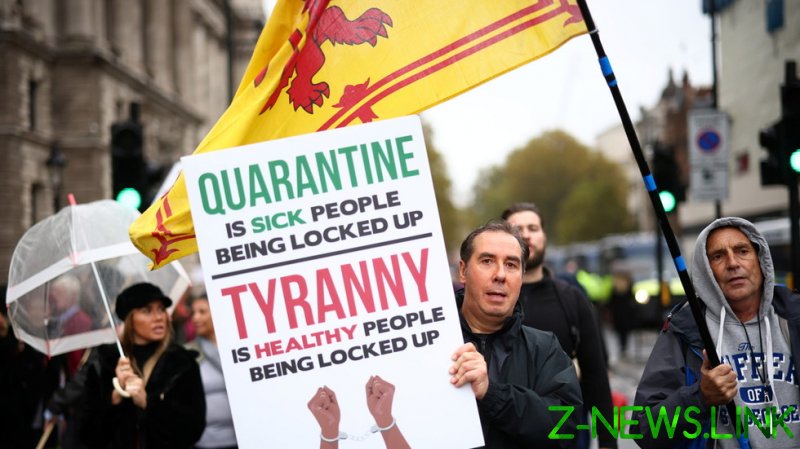 These days, if you want to shut down critical or dissident views, all you need to do is shout ‘denier’. This morally charged scare word is often hurled at anyone who questions the efficacy of the current lockdown or any of the policies associated with it. Consequently, the term denial is used to delegitimise the view of someone who is sceptical about the lockdown.

For some time now, scepticism – an attitude associated with a questioning mind – has been targeted by would-be censors and treated as a marker for insidious behaviour. ‘How climate scepticism turned into something more dangerous’ warns an academic in the Guardian.

The rhetorical strategy of attributing malevolent intent to scepticism is demonstrated by the decision of the Guardian to update its style guide by changing the usage of the term ‘climate sceptic’ to that of ‘climate denier’.

With its long-established religious connotation as an expression of heresy, denial communicates an act of mortal sin. This quasi-religious meaning is still conveyed by 21st century moral entrepreneurs. “I have seen Covid denial up close – it was a chilling experience,” writes a commentator.

In recent times, the term denial has mutated from its religious connotations to become an all-purpose secular sin. It has emerged as a turbo-charged moral crime because of its association with the Holocaust. The Holocaust is rightly recognised as a unique symbol of human evil.

Those who deny the existence of gas chambers and death camps are condemned as the personification of evil. Given the powerful association with moral corruption and evil, its memory is sadly exploited by moral crusaders to further their cause.

Activists know that when they accuse someone of being an ‘AIDS denier’, they will tap into the memory of the death camps. They understand that when they condemn someone as a ‘climate change denier’, they are able to manipulate the powerful emotions associated with people’s loathing for the Holocaust.

This self-conscious exploitation of the Holocaust was illustrated by a journalist for the online magazine Grist, who wanted to see global warming deniers prosecuted like Nazi war criminals. With the tone of vitriol characteristic of dogmatic inquisitors, he noted that “we should have war crimes trials for these bastards,” adding “some sort of climate Nuremberg.”

During the pandemic, the rhetoric of denial has been frequently used to associate people who are sceptical of government policy with the sins of other types of denials. As one commentator explained: “Denial is pernicious and can have dire impacts. Climate change denial leads to lack of action that would preserve a healthy planet. Mask denial leads to increased spread of and mortality from the Covid virus. Denial of sexual abuse leads to horrific instances where an abuser is allowed to persist in their malfeasance for years because those responsible for the institutions in which they operated – schools, churches, companies, scouts, etc) refused to face the terrible reality that existed under their own roofs.”

From this perspective, denial itself, without regard to any specific object is pernicious. The targeting of denial has little to do with the distinct features of any specific issues. It is driven by a mood of intolerance towards those who are sceptical of the received wisdom.

The alarmist tone used to rebrand anyone sceptical of a lockdown policy as a denier makes it difficult for many people to openly voice their reservations on the predicament they face. A lockdown sceptic is not simply treated as someone with a different point of view but as a threat to the community. They are also condemned for having blood on their hands. They have “deadly beliefs” which constitute a threat to the survival of a community.

Sceptics are routinely portrayed as a danger to life and therefore, at the very least, they need to be ostracised, censored and humiliated. This sentiment was underlined by Guardian columnist Owen Jones, who characterised the views of a scientist who dissented from the lockdown consensus as “dangerous.”

Predictably, such an accusation serves as a prelude for demanding that this dangerous scientist should be prevented from having access to the media to voice his views. The association of danger with scepticism informs an editorial in the Guardian titled, ‘The Guardian view on Tory lockdown sceptics : a dangerous trend’.

Yet a sceptical attitude is essential in the middle of a pandemic when so much is at stake. People need to be able to voice their sentiments, make criticisms and offer suggestions without the fear of being charged with an act of heresy. Harnessing the creativity and the wisdom of the public requires the freedom of speech.

It is important to remember that it is not the sceptic but the moral entrepreneur who exploits the memory of the Holocaust by promiscuously using the word denial. Sceptics are not deniers, but affirmers of the necessity for asking questions in pursuit of the truth.