Democrats, Never-Trumpers compiling ‘lists’ of Trump supporters in case ‘they try to deny complicity’ in future 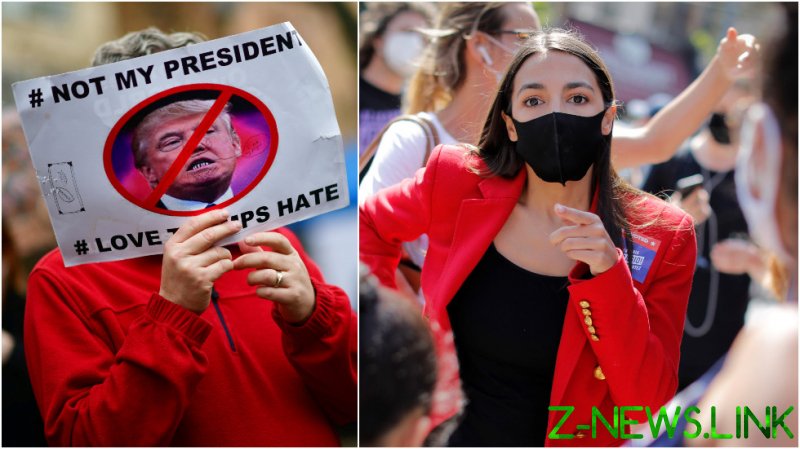 As ballots continue to be tallied across several battleground states three days after Americans hit the polls to select their next president, knives are coming out among some of Trump’s detractors. A new initiative dubbed the “Trump Accountability Project” is compiling names of  administration officials and the president’s high-profile supporters and donors, insisting “we must never forget those who helped further the Trump agenda.”

While the project doesn’t say how it will use its blacklist to ensure “accountability,” the registry has already swelled to hundreds of names, including dozens of sitting judges, and continues to grow as others in the anti-Trump orbit come around to the idea. The list was publicly viewable for a brief time, but was locked by its creators on Friday evening without explanation, evidently defeating its purpose altogether.

Among the project’s supporters is Democratic Rep. Alexandria Ocasio-Cortez (New York), who called to document the “tweets, writings [and] photos” of “Trump sycophants” so that they can’t “deny their complicity” with the current administration.

The congresswoman soon prompted a response from Obama administration alum Michael Simon, a member of the Accountability Project team, who vowed to compile the names of “every administration staffer, campaign staffer, bundler, lawyer who represented them – everyone.”

In a stroke of irony, Simon sent his reply down the memory hole in a matter of hours, telling mathematician and commentator Eric Weinstein the tweet was too “strident” after the latter mockingly suggested “solitary confinement” and “executions” for those on the blacklist. Simon’s deleted post was preserved for posterity in screenshots, however – as one netizen pointed out, “the internet is forever.” Simon later scrubbed his response to Weinstein as well, and shortly thereafter locked his entire Twitter handle from the prying eyes of the public. 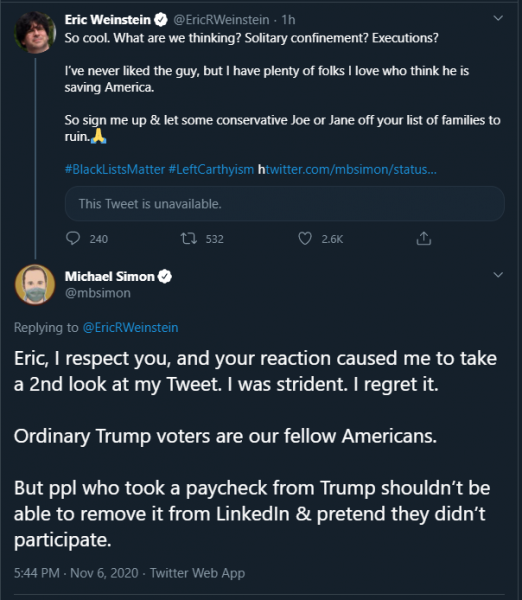 The Washington Post’s Jennifer Rubin – who until September styled herself as a “conservative opinion writer” – also endorsed the blacklist initiative, saying Republicans questioning the result of the 2020 race “should never serve in office, join a corporate board, find a faculty position or be accepted into ‘polite’ society.”

Like Weinstein – who was joined by his brother, Bret – a host of conservative commentators also saw dark undertones in the effort to compile lists, with Will Chamberlain of Human Events going as far to suggest that they would be used to “strip [people] of their rights and property.”

“Have fun with your little Listallnacht project. Those always turn out well,”tweeted Federalist co-founder Sean Davis. “Are you going to make your targets wear certain types of clothing for identification purposes?”

Other netizens also weighed in to slam the idea, one asking whether the blacklists would be used to “hold some kind of Nuremberg trial” for Trump supporters, while another charged that the project would only “fan the flames” and intensify “the polarization plaguing our nation.”

While the blacklisters appear to be taking Trump’s electoral defeat as a foregone conclusion, no winner has yet been declared in the 2020 race as reams of mail-in ballots continue to be counted. Democratic nominee Joe Biden is nearing the 270 electoral votes needed for victory, but close contests across Nevada, Pennsylvania and Georgia could still shake up the outcome and open up a path to victory for the incumbent.