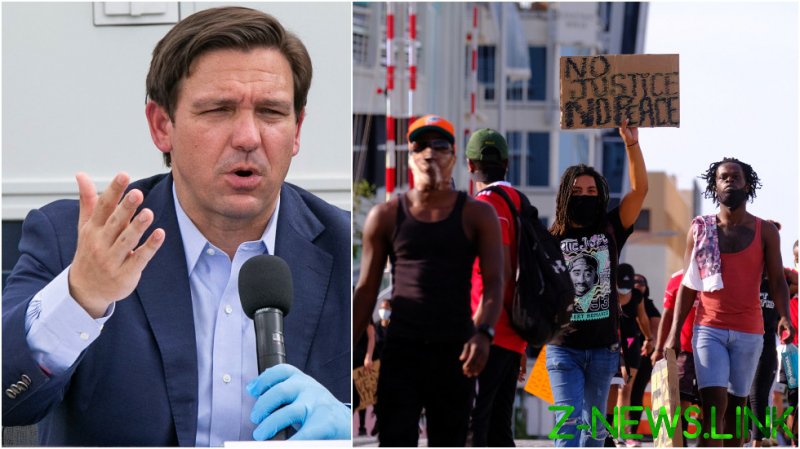 The Republican governor introduced the new law during a Monday press conference – the Combating Violence, Disorder, and Looting and Law Enforcement Protection Act – which, if passed by the state legislature, would make participation in “disorderly assemblies” a third-degree felony, among other measures.

“Our right to peacefully assemble is one of our most cherished as Americans, but throughout the country we’ve seen that right being taken advantage of by professional agitators, bent on sowing disorder and causing mayhem in our cities,” DeSantis said in a statement.

One critic suggested the bill was merely a ploy to “distract” from the governor’s “disastrous covid response,” also observing that it proposes charges related to racketeering for protest organizers.

The American Civil Liberties Union also blasted the proposed legislation as “undemocratic,” saying its primary effect would be to “silence, criminalize, and penalize Floridians who want to see justice for Black lives lost to racialized violence and brutality at the hands of law enforcement.”

Despite the vocal opposition, the bill found support among conservatives who suggested it could serve as a “model for the nation,” or at least for other Republican governors.

One supporter even called on the governor to “make sure all the [district attorneys] in all 67 districts in Florida stand firm and prosecute to the fullest extent of the law,” pointing to a number of other cities around the US where local prosecutors have declined to pursue charges for protesters.

So far, over 100 people have been arrested in Orlando in connection to the ongoing Black Lives Matter protests, which have gripped scores of American cities since the death of George Floyd at the hands of law enforcement in May. While most of those arrested have been charged with misdemeanors such as disorderly conduct, if DeSantis gets his way future rioters will face much harsher penalties.

More recent demonstrations over the police killing of Salaythis Melvin in August saw protesters blocking the roadways, which the new law would make a felony offense.