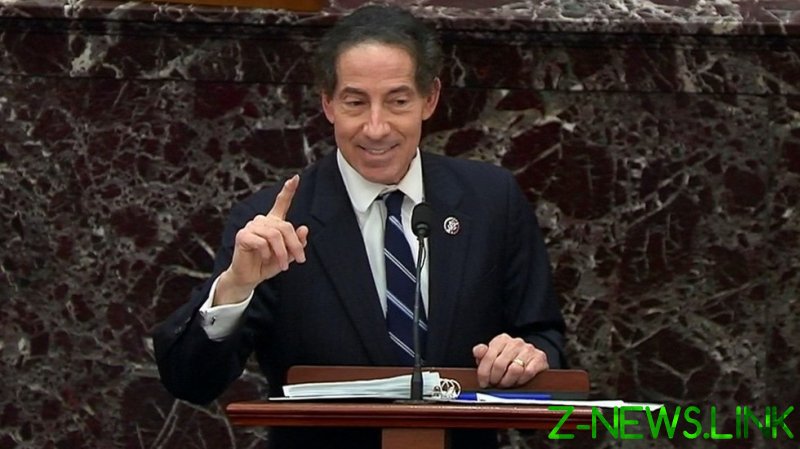 House impeachment managers and lawyers for Trump agreed on Saturday to enter as evidence a statement by Representative Jaime Herrera Beutler (R-Washington) describing what she had been relayed about a telephone call during the January 6 Capitol riot. The congresswoman said late Friday that when House Minority Leader Kevin McCarthy (R-California) called Trump and asked him to demand a stop to the violence, the former president replied, “Well, Kevin, I guess these people are more upset about the election than you are.”

Although Herrera Beutler has publicly discussed her allegation with constituents, colleagues, and media outlets since last month, House impeachment manager Jamie Raskin (D-Maryland) said her statement necessitated calling witnesses because it was a critical piece of new evidence to help prove that Trump incited the riot. The Senate voted 55-45 to allow for witnesses – over the objections of Trump’s lawyers – with Senator Lindsey Graham (R-South Carolina) and four other Republicans joining the Democrats in opening the door for testimony.

The decision to instead settle for entering Herrera Beutler’s statement in the trial record put the case back on track to be completed as soon as Saturday. Allowing the lawyers to call witnesses was a potential double-edged sword for the Democrats because it would delay completion of the trial and potentially lead to more political theater, undermining President Joe Biden’s legislative agenda.

As Graham warned last week, the Republicans would demand to hear from a long list of their own witnesses if the Democrats pressed for employing subpoenas. Among the targets would not only be representatives of the FBI to testify about the alleged pre-planning of the January 6 Capitol riot and apparent security breakdowns – but also Democrat politicians themselves. Given that former President Trump is charged with inciting the riot with his political rhetoric, the Republicans want to examine what they consider the even more direct incitements of violence by Democrats. For instance, Vice President Kamala Harris was accused of inciting political violence last year when she promoted a bail fund to get Black Lives Matter and Antifa rioters released from jail.

Before the agreement on Herrera Beutler’s statement, Trump lawyer Michael van der Veen said he would need to take depositions from upward of 100 witnesses, including Harris and House Speaker Nancy Pelosi (D-California). As he angrily pounded his finger on the dais and demanded that the depositions be done in person, in his office in Philadelphia, he pronounced the city’s name “Phillydelphia,” setting off gales of laughter in the Senate chamber. Apparently confused by the response, he explained how depositions work. “I don’t know why you’re laughing,” he said. “It is civil process. That is the way lawyers do it.”

The Democrats appear unlikely to succeed in convicting Trump, which would require a two-thirds Senate majority, or as many as 67 votes. All but five of the 50 Republicans in the Senate voted for a motion to declare the effort to convict a former president unconstitutional. Senate Minority Leader Mitch McConnell (R-Kentucky) reportedly told colleagues on Saturday that he would vote to acquit Trump.