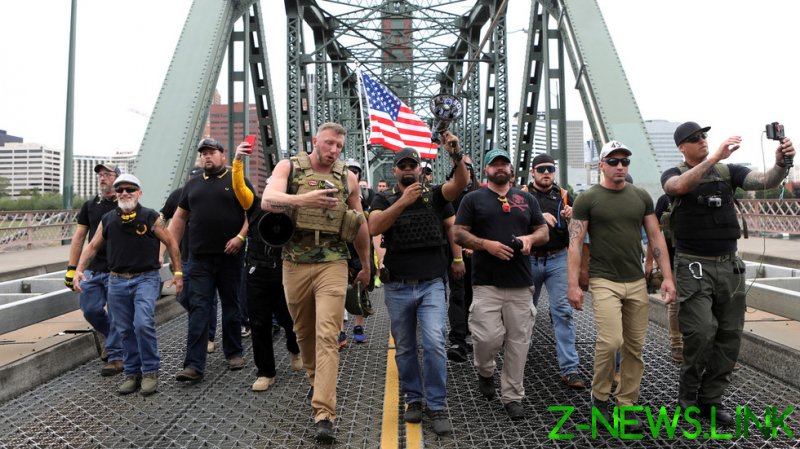 Media outlets from the BBC and the Wall Street Journal, Forbes, the Jerusalem Post and Quartz to Scripps National News did articles profiling the Proud Boys after President Trump told the group to “stand back and stand by” from riots across the US. The New York Times, the Washington Post, Mother Jones, NBC and The Hill also posted stories on how the Proud Boys were celebrating after Trump called them out.

Trump’s comments and the media reaction likely pushed the Proud Boys from the margins to center stage in terms of public awareness. As if that weren’t enough to spur a recruiting surge, Democrat politicians chimed in to demonize the group. When CNN host asked Democrat vice presidential candidate Kamala Harris about Trump referring to the “far-right, neo-fascist” Proud Boys, she said, “I heard what we all heard – the president of the United States, in the year of our Lord 2020, refuses to condemn white supremacists.”

Harris added that Trump is “dog whistling through a bullhorn” to appeal to racist white people.

Senator Chris Murphy (D-Connecticut) said that in his debate with Democrat challenger Joe Biden, Trump sought to organize and election-day intimidation effort by right-wing groups. “He succeeded,” Murphy said. “Recruitment by Proud Boys and others is under way.”

Representative Ayanna Pressley (D-Massachusetts), member of the left-wing “squad” in the Democrat-controlled House, joined in dropping the group’s name, saying, “Did he denounce Proud Boys and we missed it?”

Democrats also lamented that Proud Boys shirts emblazoned with Trump’s words were already being sold Tuesday night. One Twitter user even theorized that the president and the Proud Boys must have conspired for the shirts to be available so quickly, saying, “Trump must have told them the questions before the debate.”

But Vogue magazine producer Kinsey Clarke pointed out the possible harm done by raising the group’s profile: “Consider deleting this so as not to give domestic terrorists more publicity than they’ve already gotten,” she said.

Trump told reporters Wednesday that he didn’t know who the Proud Boys were, but he wanted them to stand down and let law enforcement quell violent protests around the country. Asked again if he denounces white supremacists, he said he has always denounced them. He added that any form of crime, including that committed by right-wing militias, concerns him.

Proud Boys were founded in 2016 as an all-male organization dedicated to “defending Western values.” Its members have clashed with Antifa and other left-wing groups in demonstrations across the US, including on the side of another right-wing group, the Patriot Prayer.

Described as “white nationalist” and “neo-fascist” by ‘anti-hate’ groups such as the Southern Poverty Law Center and the mainstream media, the Proud Boys have been blamed for provoking violent confrontations. The group denies having any racial animus and says that it is multi-race. It also rejects being “white supremacist.”

Proud Boys Chairman Enrique Tarrio, who is of Afro-Cuban ethnicity, said he was excited about being mentioned by Trump at the debate, but he didn’t take the reference as an endorsement, because “the question was in reference to white supremacy, which we are not.”

The group recently made headlines in the wake of a shooting in Portland. CCTV footage showed that a Proud Boys member was stalked and shot dead by a self-described “100% Antifa” activist. When the group held a memorial service a week later in nearby Vancouver, Washington, one of its members was purposely run over in a parking lot and injured, allegedly by a truck driven by an ‘Antifa’ member.