Democratic congressman Swalwell sues Trump for EMOTIONAL DAMAGE over Capitol riot, says he was ready for COMBAT with mob 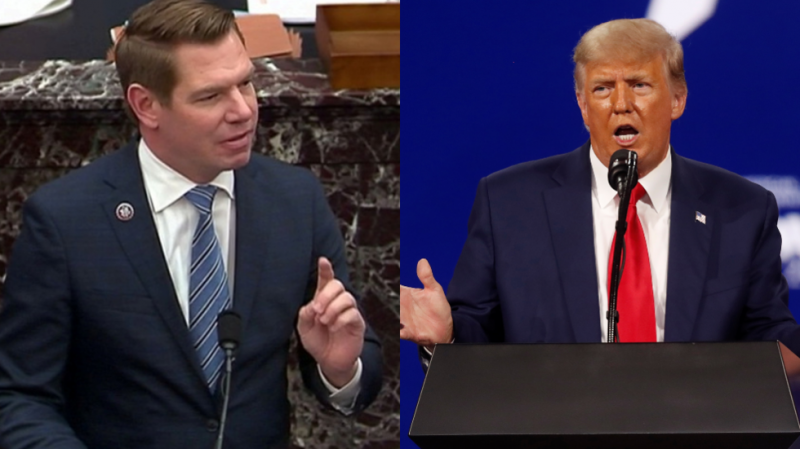 In a civil lawsuit filed in Washington, DC, on Thursday, Swalwell (D-California) alleges that former President Trump, along with his son, Donald Jr., Rep. Mo Brooks (R-Alabama), and lawyer Rudy Giuliani, are directly responsible for causing him “severe emotional distress,” namely by encouraging rioters to march to the US Capitol after speeches outside the White House on January 6.

The meandering 65-page suit alleges that Trump and his allies engaged in “conspiracy to violate civil rights,” “neglect to prevent interference with civil rights,” “incitement to riot,” “inciting assault,” “disorderly conduct,” and “terrorism.” In addition, Trump and his associates inflicted “severe emotional distress” on Swalwell, who was inside the House chamber certifying the results of the 2020 election as the rioters entered the building.

One bizarre paragraph in the suit claims that Swalwell “prepared himself for possible hand-to-hand combat as he took off his jacket and tie and searched for makeshift instruments of self-defense.”

“As the Plaintiff watched this horror unfold, he texted with his wife in what he felt could be his last moments, telling her ‘I love you very much. And our babies,’” the description of Swalwell’s apparent ordeal continued.

That Swalwell would sue Trump is unsurprising. The California congressman has long been a vocal opponent of the 45th president, and spent a considerable amount of time over the last four years telling cable TV hosts that he had proof of Trump’s supposed collusion with Russia, claims that were never backed up. After a short-lived run at his party’s presidential nomination in 2019, Swalwell went on to serve as a manager in the Democrats’ most recent attempt to impeach Trump after the Capitol riot.

He is the second lawmaker to sue Trump, after Mississippi Rep. Bennie Thompson last month. Thompson also claimed to have suffered “emotional distress” during the riot, but blamed pro-Trump groups including the Oath Keepers and Proud Boys for his suffering, along with Trump and Giuliani. Those who haven’t sued have held therapy-style hearings and demanded mental health help for Capitol staff.

Trump, banned from social media and maintaining a low profile since leaving office, has not addressed Swalwell’s lawsuit directly. His spokesman, Jason Miller, told Reuters that Swalwell “is a low-life with no credibility.”