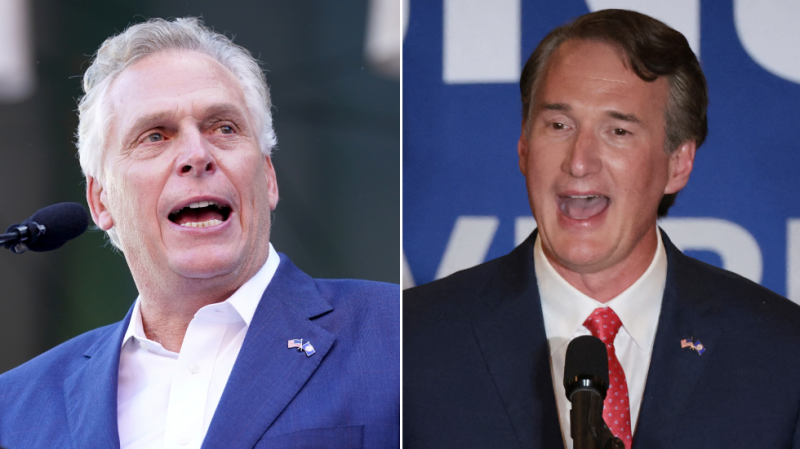 In a statement on Wednesday morning, McAuliffe congratulated the new governor as he admitted defeat, and called on all Virginians in wishing him and his family all the best. McAuliffe said he was grateful for all those that had supported him along the way, and reminded them to keep up the fight for the values in which “we so deeply believe.”

Speaking to crowds in Chantilly in the early hours of Wednesday morning, Youngkin described his victory as “a defining moment,” and promised to start his transformation of the state on day one.

Youngkin was speaking before the results had been officially announced, although predictions showed very little chance of Democrat candidate Terry McAuliffe overtaking him. With 95% of the vote having been counted, Youngkin was up 2.7 points.

The former executive is the first Republican to have been elected to state office in Virginia since 2009. Selling himself as an outsider, Youngkin has seen his popularity soar in the polls in recent weeks, having rallied suburban voters on hot topics such as how schools handle race, gender, and mask mandates.

The election was seen as a litmus test for the popularity of Joe Biden’s presidency. Just last year, Biden won the state by 10 points as he challenged Trump for the White House. The Virginia vote is also viewed as a bellwether for the crucial midterm elections in 2022, which will decide who controls Congress.

The president’s support has plummeted in the polls since the US’ messy withdrawal from Afghanistan and his failure to push his policies over the line. His administration will now face an even steeper task to push through a $1 trillion infrastructure bill and $1.8 trillion welfare and climate package. Biden’s $555 billion climate investment pledge, made at COP26, may also be in doubt.

Trump was quick to take the credit for Youngkin’s success, thanking his “base” for coming out to vote for the Republican candidate. “The MAGA movement is bigger and stronger than ever before … Without you, he would not have been close to winning,” he said in a statement.