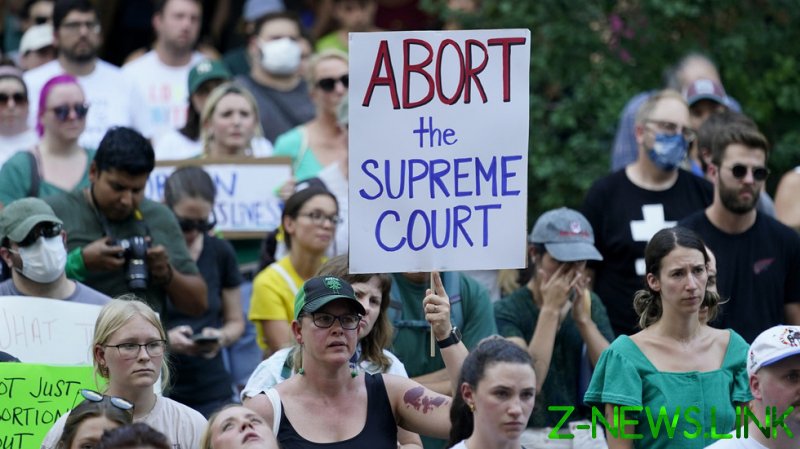 Democratic lawmakers have called for mass protests after the US Supreme Court overruled Roe v. Wade, a landmark case underpinning federal abortion protections for nearly five decades, with some reps urging supporters to go to “war” over the issue.

The court’s decision to overturn the 1973 case on Friday was quickly met with outrage from Democrats, many demanding street demonstrations in support of abortion rights nationwide.

“Voting is critical but alone it’s not enough. We will need to organize, strike, fill coffers of abortion funds, open our homes to help those seeking safe passage, and more to establish and defend our rights,” wrote progressive Rep. Alexandria Ocasio-Cortez (New York), who was earlier seen outside the Supreme Court calling on Americans to go “into the streets.”

Her comments were condemned by Georgia Republican Marjorie Taylor Greene, who accused the lawmaker of attempting to launch an “insurrection” while stating that “any violence and rioting” that followed would come as a “direct result of Democrat marching orders.” Ocasio-Cortez shot back that “exercising our right to protest” is not the same as “an attempt to overturn democracy.”

During an appearance on MSNBC to discuss the decision, Rep. Jackie Speier (D-California) said supporters should “armor up,” as “there is a war out there,” and was quickly echoed by Rep. Ayanna Pressley of Massachusetts.

A number of other Democratic congresspeople also showed up at the court in Washington, DC to slam the decision, with Maxine Waters (California) stating “to hell with the Supreme Court, we will defy them.” She was joined by Texas Rep. Al Green, who later declared “this fight isn’t over,” vowing to continue supporting “women’s health, privacy, and right to choose.”

A large crowd gathered near the court building not long after the decision was announced, many carrying signs and shouting slogans. Some protesters clad in all-black were also seen marching in the area, resembling more radical ‘black bloc’ agitators seen at prior demonstrations across the US.

Republicans, meanwhile, have largely backed Thursday’s ruling, as many in the party are vocally anti-abortion. Massachusetts Senator Mitt Romney, who has been at odds with other GOP members over his staunch opposition to former President Donald Trump, issued a statement reiterating his support for “the sanctity of human life,” saying that “children – both born and unborn – deserve our protection.” He was joined by a long line of Republican lawmakers, such as Rep. Liz Cheney, who cheered the Supreme Court decision for returning “power to the states and the people …to address the issue of abortion under state law.”