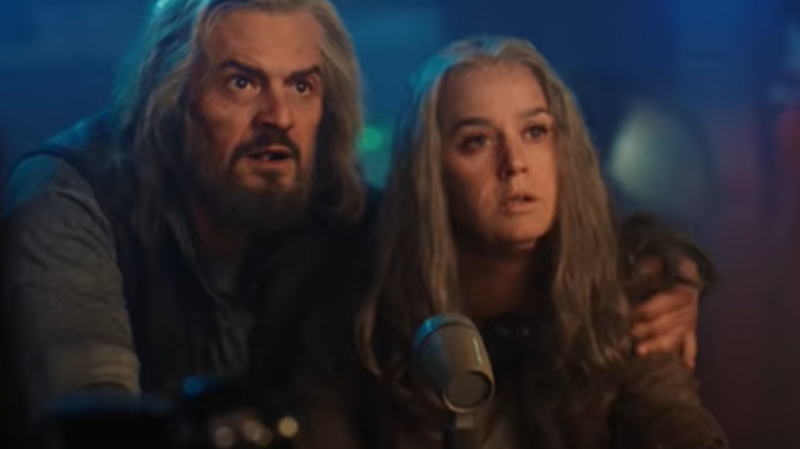 Released on Thursday, the ad stars Perry and Bloom as a pair of ragtag freedom fighters living under a presumably Republican dictatorship in the year 2055. In a message beamed back to the present day, they warn that “Democracy is dead” in the future, and that “the regime watches our every move.”

“It started when voter suppression ran wild all over America,” Perry states, referencing a slew of state-level bills that their Republican sponsors say will tighten up election security, but Democrats argue would make it more difficult to vote.

Perry and Bloom then move on to the hard sell. “Save Democracy while you can!” Bloom shouts, while Perry demands viewers “Call your Senator now!” The video ends with jackbooted riot police kicking down the door of the two heroes’ hideout, and closes with a message: “Call your senator and tell them to pass the For the People Act.”

The act is a piece of Democrat-sponsored legislation that would automatically enroll voters, expand mail-in voting nationally, and prohibit election officials from using certain methods to question someone’s eligibility to vote or remove a person from voting rolls. It would also prohibit “onerous voter identification requirements,” which Republicans and multiple governments across the developed world argue are necessary, at least on some level, to prevent fraud.

Although it was shared and reposted by liberal activists and Perry and Bloom’s Hollywood pals, the ad was mocked into the ground by the right. “Cringe suppression now,” conservative pundit Mike Cernovich jibed, while reporter Mairead McArdle described it as “the most cringe thing I’ve ever seen.”

Others, many of whom claim that Joe Biden’s 2020 win may have been fraudulent, accused Perry and Bloom of promoting legislation that, they argue, would be far more likely to usher in a bleak and dystopian future.

Despite Perry and Bloom’s time-traveling message, the chances of the For The People Act passing any time soon are fairly slim. Passing the legislation would require a 60-40 vote in the Senate, and the Democrats right now hold a 51-50 majority, when the tie-breaking vote of Vice-President Kamala Harris is taken into account. Without another vote to eliminate the filibuster – the rule that mandates the 60-40 vote requirement – the bill is frozen in the Senate.