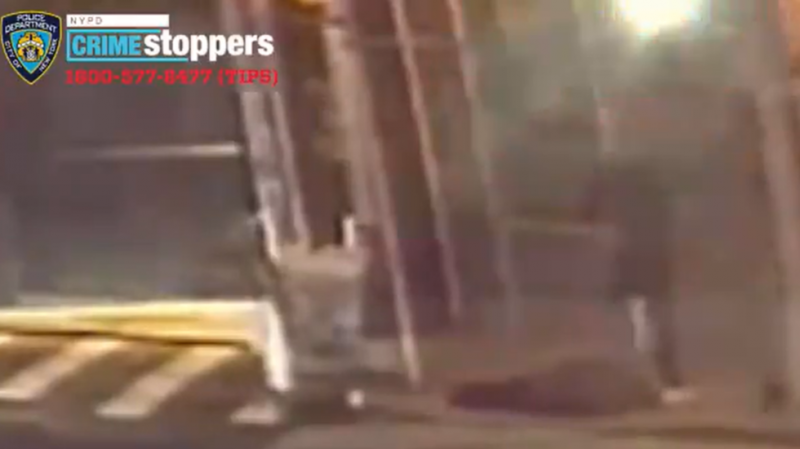 The video, which was released on Saturday by the New York Police Department’s Hate Crimes unit, shows the tail end of the attack, with the 61-year-old man being stomped on the head at least six times as he lays on the ground, helpless and possibly unconscious. At one point, the attacker appears to gather himself, then nearly rises up off the ground as he raises his foot high to deliver an especially powerful fifth stomp.

The incident occurred on Friday night in East Harlem, according to police, who are seeking tips from the public to help identify the assailant. It began as the Asian man was collecting aluminum cans with a shopping cart in front of an apartment building under construction at Third Avenue and East 125th Street. He was attacked from behind and knocked to the ground.

The victim was taken by ambulance to Harlem Hospital, where he was listed in critical condition. Police haven’t determined whether the man was targeted because of his ethnicity. The suspect was described as a man wearing a black jacket, black pants, white sneakers and a multi-colored baseball hat.

The US has seen a wave of senseless attacks on Asian-Americans, especially in New York and the San Francisco Bay area. For instance, a black man who was on parole for murdering his mother in 2002 was arrested last month for allegedly attacking a 65-year-old Asian woman in front of a Manhattan apartment building. An assailant was caught on surveillance video kicking the woman in the chest, knocking her to the ground, then kicking her in the head repeatedly as witnesses watched the attack and did nothing to help the victim.

Most of the recent high-profile attacks on Asians have allegedly been perpetrated by young black men, including one California case in which an elderly Thai man was killed. Nevertheless, anti-racism activists have blamed the disturbing trend on former President Donald Trump and “white supremacy.” In fact, after a Filipino-American man was slashed from ear to ear with a box cutter by a black man on a subway car in February, activists responded by holding a rally against white supremacy.

The video of Friday’s attack ends with the attacker walking away nonchalantly. “Why is this not all over national news?” one Twitter commenter asked. “Why isn’t this covered like George Floyd? Why do Asian lives not matter?”