‘Deep State’ much? Pelosi and Raskin’s 25th Amendment body would let unelected bureaucrats override the will of American people 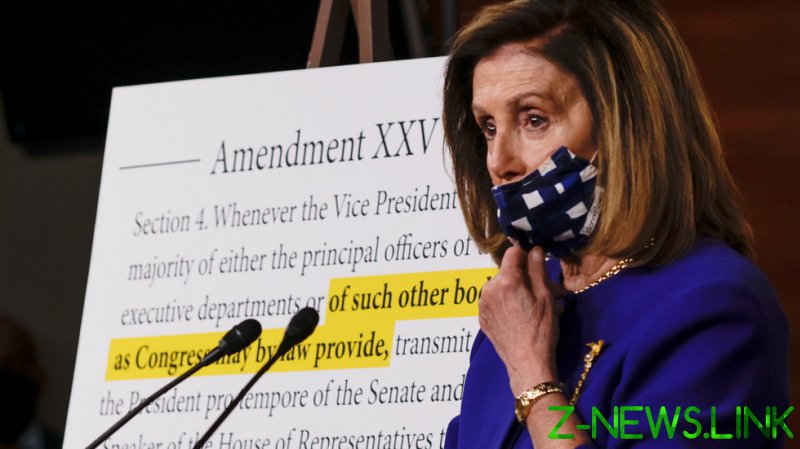 The pompously named Commission on Presidential Capacity to Discharge the Powers and Duties of Office, unveiled on Friday by House Speaker Nancy Pelosi (D-California) and Rep. Jamie Raskin (D-Maryland) is technically based on the provision in the 25th Amendment of the US Constitution, allowing for “such other body as Congress may by law provide” to govern the process of succession should a president become “incapacitated.”

With just weeks left till the November 3 election, and zero chance of the Republican-majority Senate or President Donald Trump endorsing the proposal, it’s unclear at first why the Democrats would unveil it now.

Pelosi swears this isn’t about Trump. “He will face the judgment of the voters,” she told reporters on Friday. “But he shows the need for us to create a process for future presidents.”

It didn’t take long for a number of people – from former House Speaker Newt Gingrich to Trump himself – to bring up the obvious: the first target of such a “process” may well be Joe Biden.

In one of his more lucid moments, the 77-year-old actually said he wanted his running mate ready to take over “on day one.” Then he picked Senator Kamala Harris for the job.

That Harris could become president without winning a single delegate in the primaries – having dropped out before they even started – seems an irony completely lost on the media and the party normally harping on about “our democracy,” norms and traditions.

No less intriguing than the “what” of the commission is the “how.” Raskin’s proposal envisions a 17-member panel, with 16 members appointed by congressional leaders of both parties electing the last one. Half the appointees would be physicians and psychiatrists, while the other eight would be chosen from the pool of former government officials: presidents, vice-presidents, surgeons-general, and heads of the departments of State, Treasury, Defense and Justice.

Does this not resemble “a system composed of high-level elements within the intelligence services, military, security, judiciary…”? That is literally the description of “Deep State” (derin devlet) in Turkey, as articulated by journalist Mike Lofgren a couple years ago.

The only thing missing here is “organized crime” – but then, given the role of intelligence services and congressional Democrats such as Pelosi and Raskin in ‘Russiagate,’ that’s arguably not much of a stretch.

Purely for the sake of argument, imagine the Biden-Harris ticket winning the election, and then a “bipartisan” commission consisting of former Obama and George W. Bush administration officials decide that Biden is suffering from suddenly discovered dementia, handing the White House to Harris.

Now imagine Trump gets re-elected, and Democrat-dominated Congress overrides Trump’s veto to appoint the same kind of “bipartisan” commission, which then decides both he and Vice-President Mike Pence are somehow “incapacitated,” and regretfully and prayerfully declares it has no choice but to make Pelosi president, under the established order of succession.

Unbelievable? Unlikely? Outlandish? Remember, we’re talking the same people who fabricated Russiagate from lies and insinuations, who believe the “Russian bounties”fantasy and the “very fine people”blood libel, who actually tried impeaching Trump over a phone call with the president of Ukraine because he overrode unelected bureaucrats who think theymake policy.

These are the same people who openly and seriously propose abolishing the centuries-old electoral college, packing the Supreme Court and creating new states, all to guarantee themselves a permanent majority.

Pelosi is technically correct that this isn’t about Trump personally. This is about making sure another Trump – meaning, a populist not beholden to the Washington establishment and willing to confront it, however ineptly – from ever happening again.