Home / business / Declassified the loss of Russian mercenaries in Syria

Declassified the loss of Russian mercenaries in Syria 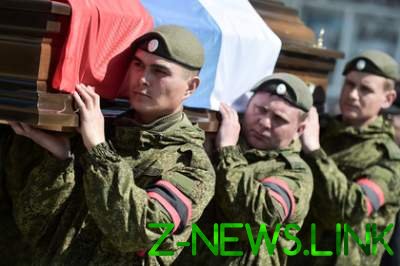 In the period from January to September 2017 in Syria killed at least 131 the citizen of Russia.

They are all men of private military companies.

Reuters reviewed the death certificate of one of the Russians, issued by the Russian Consulate in Damascus. In a document dated 4 October listed the name of 36-year-old resident of Krasnodar region Sergei Poddubny. He died in the town of Tias HOMS province on September 28. As the cause of his death is called “the charring of the body.” The help does not mention the occupation of the men, his cousin and a friend told Reuters that Poddubny was civil and went to Syria on a private contract to participate in the fighting.

See also:  Ani Lorak "lit up" in the arms of a popular Russian singer

In the document the deceased has room 131. The Agency notes that, according to the Russian rules of registration of such documents, the Agency consistently count the number of deaths, beginning with January 1 of the calendar year. Thus, at the time of registration help the Consulate has registered a 130 deaths of Russian citizens in Syria. Thus, according to the representative of the Russian Consulate in Damascus, among these 131 Russian troops operating there.

Press Secretary of the President of Russia Dmitry Peskov told Reuters that the authorities “have no information about individuals who visit Syria.” “This, I believe, the issue worked out,” he added.

In the Russian Ministry of defense and the Consulate of Russia in Syria has not responded to Agency requests for comment. “The ribbon.ru” also failed to receive the operative comment from the defense Ministry.

See also:  Putin spoke harshly about the attack against the US

In 2017, the Ministry officially confirmed the death of 16 Russian military personnel in Syria. Last time on the death of the military was reported on 4 September. Then two Russians were killed in a mortar attack by terrorists “Islamic state” (IG, an organization banned in Russia).

23 Oct first tab “In the trend” of the Russian segment of YouTube has released a rap clip dedicated to the soldiers of PMC Wagner (Dmitri Utkin). According to some, the campaign participated in the battles in Syria.