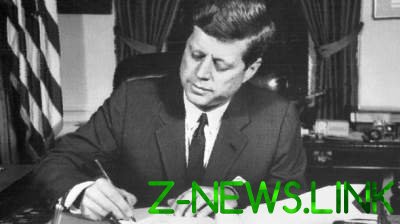 Trump indicates that publication are not all documents, the publication of which was scheduled

The trump indicates that publication are not all the documents whose publication was planned. The reason is the request of the Federal agencies and departments to give them time to familiarize with the materials.

“Today I have no choice but to agree with these requests, so as not to cause irreparable damage to the security of our nation”, — said the American leader. He, however, noted that the government will assess the feasibility of classifying the remaining materials, and if need it will not, the remainder will publish April 26, 2018.

Available materials will be uploaded on a special section of the website of the National archives of the United States.

John Kennedy led US a little over two years and was mortally wounded during a trip to Dallas November 22, 1963. According to the official version, his killer was a loner named Lee Harvey Oswald who shot the President from a sniper rifle from a distance. The circumstances of the death of the President are still controversial.

See also:  Lutsenko started the process of preparing the documents for my arrest and extradition, - Saakashvili

Recall that the deadline for the publication of documents related to the assassination of the American President, expires on October 26.

Earlier it was reported that the national archives of the United States published nearly four thousand documents related to the assassination of the 35th President John Fitzgerald Kennedy, among which there are audio recordings of the testimony of former KGB agent Yuri Nosenko about Lee Harvey Oswald, the Prime suspect in this crime.