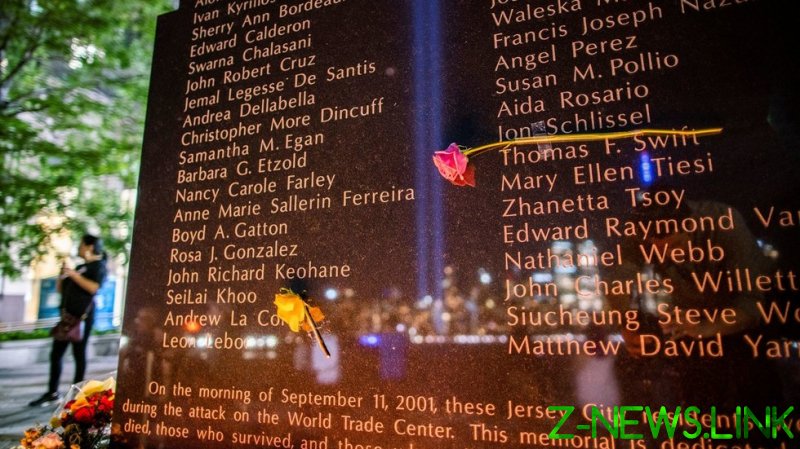 The document released on Saturday is from 2016, when the now-closed FBI investigation into Saudi links to the terror attacks was still active. Families of 9/11 victims have asked multiple administrations for its release, expecting it to provide proof implicating the Saudi government or Saudi officials. Riyadh denied any connection to the plot.

The heavily redacted 16-page document outlines ties between Saudi associates, some of the 9/11 hijackers and various people sympathetic to the Al-Qaeda cause. It didn’t provide the smoking gun that some critics of the Saudi government hoped for, but offered more details about the connections.

One of the persons of interest in the investigation was Omar al-Bayoumi, whom the FBI long suspected to be a Saudi intelligence operative. Bayoumi provided support to Nawaf al-Hazmi and Khalid al-Mihdhar, two of the hijackers, after they arrived in the US in January 2000.

According to the memo, a source told the FBI that Bayoumi held a “very high status” in the Saudi consulate in Los Angeles. He was regarded “higher than many of the Saudi persons in charge” of the diplomatic mission, the memo said, which was strange considering his overt position as a mere student.

One of the people he was in “almost daily contact” with during the hijackers’ stay in Los Angeles and San Diego was Osama Bassnan, a Saudi national and a suspected agent.

According to the memo, Bassnan expressed open support for terrorism. In 1992, he hosted a party at his home in Washington for the mastermind of the 1993 World Trade Center bombing, ‘Blind Sheik’ Omar Abdel-Rahman. He also “expressed enthusiastic support” for Osama bin Laden and approved of suicide bombings in the name of Islam.

In April 2001, the wives of Bassnan and Bayoumi were arrested together in San Diego for shoplifting from a jewelry store.

Another Saudi national mentioned in the memo on multiple occasions is Fahad al-Thumairy, an official at the consulate, who too provided logistical assistance to the two hijackers. Sources told the FBI that the Saudi officials held “extremist beliefs.”

Thumairy was linked through communications to various people with Al-Qaeda sympathies. One such link, which the memo described as “concerning,” led FBI investigators to Ahmed Ressam, who was convicted for the 2000 Al-Qaeda plot to bomb the Los Angeles International Airport.

The group 9/11 Families United, which seeks to hold Saudi Arabia accountable for its alleged role in the terrorist plot, welcomed the declassification of the memo, saying it “puts to bed any doubts about Saudi complicity in the attacks.”

It added that the release was “the first step by the Biden Administration, in the wake of the President’s recent Executive Order, towards declassifying and releasing government documents” related to the attacks.

Earlier this month, President Joe Biden ordered the Justice Department to review and possibly release the documents by the 20th anniversary of the 9/11 attacks. A wider effort to declassify similar papers is underway. Previous administrations declined calls to publish such materials, citing national security.

The 2001 attacks killed over 3,000 people, becoming the deadliest terrorist plot in the country’s history and triggering a world-altering change in US foreign policy, resulting in the so-called Global War on Terror. Most of the 19 hijackers were Saudi nationals.