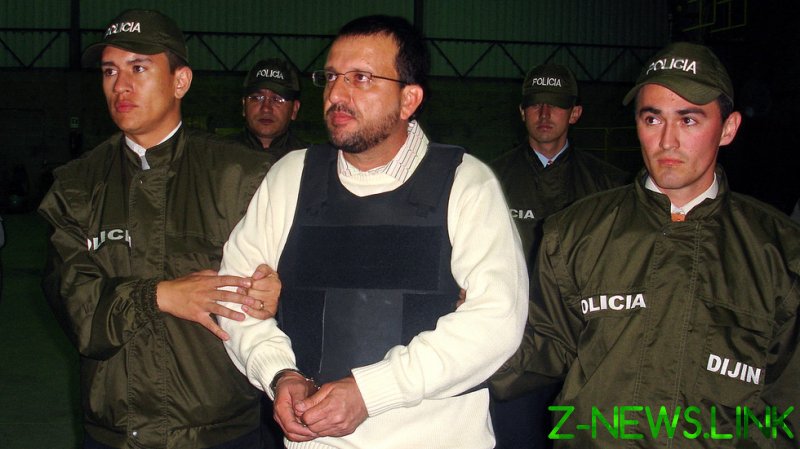 The judgment marks the culmination of a legal battle lasting over a decade. Then-Colombian President Álvaro Uribe extradited Jiménez – nicknamed‘Macaco’ by his subordinates – to Washington in 2008, whereupon he was convicted of drug trafficking and served 11 years of a 33-year sentence.

US prosecutors opted to focus exclusively on narco-related charges, meaning thousands of victims of Macaco’s paramilitary group, Bloque Central Bolivar, were prevented from seeking justice for assassinations, massacres, and other acts of extreme violence perpetrated by him and his criminal fraternity over the course of their never-ending, blood-spattered war against the Revolutionary Armed Forces of Colombia (FARC).

Released in 2019 and repatriated to Colombia, Jiménez was immediately arrested on homicide and conspiracy charges. Now at last brought to justice, the presiding judge cited “an abundance of evidence” that Bloque Central Bolivar “operated in a symbiotic relationship with Colombian state actors,” and moreover with protection from law enforcement, as the group committed countless hideous atrocities.

Central to his conviction were declassified State Department and Central Intelligence Agency reports exposing the “long-standing relationship between [Colombian] state security forces and [local] paramilitaries,” sourced by the US National Security Archive, which the organization has now published for all to see.

One needn’t be a cynic to conclude that Jiménez was afforded active US protection – the documents released by the Archive make unambiguously clear that Washington was covertly tracking this relationship very closely indeed, on a seeming daily basis, the minutiae of the contact between the armed faction and the Colombian government documented in extensive detail.

Take for instance a declassified CIA report from March 2001, mere months before Estrada was cold-bloodedly murdered, which records how paramilitary operatives were “temporarily forced to relocate.” Despite this resulting from the Colombian Army “seeking to neutralize illegal armed groups’ ability to wage war in the region,” captured fighters were “treated well” and “subsequently released, along with their weapons.”

Moreover, the documents make abundantly clear that US intelligence has been well-aware – and presumably approved – of this dark nexus for decades. An extensive diplomatic report dispatched from the US Embassy in Bogotá in 1979 outlines how General Mario Montoya Uribe, a senior army commander, had the previous year instructed the Colombian military division he led to create and staff a cloak-and-dagger terror unit, under the guise of the American Anti-Communist Alliance.

The group was responsible for numerous bombings, kidnappings and assassinations of leftists, including the dynamiting of Colombian Communist Party headquarters, and later the offices of left-wing newspaper Voz Proletaria. The report refers to such activities as “dirty tricks”, and emphasizes government and military officials were extremely keen to keep the connivance secret, in order to maintain the country’s “good name for the protection of human rights.”

In 1999, the US Defense Intelligence Agency dismissed suggestions that the brutal campaign had been sanctioned or created by Uribe, claiming the charge was part of “an NGO smear campaign dating back 20 years.” The Archive’s disclosures prove this to have been an outright lie. Whether concerns about the military getting caught in the act prompted the Colombian government to outsource its terror operations to paramilitary groups is an open question.

The previous year, a former Colombian army officer met with US Embassy officers in Bogotá and discussed at length his grave concerns about the impunity with which military intelligence operated, dubbing it a corrupt, out-of-control “mafia”. He also decried the creeping “privatization” of the army, which increasingly focused on guarding US oil interests in the country while military duties were handed over to police, and revealed the “efficiency” of the government’s anti-FARC campaign was measured “in terms of enemy casualties.”

The source singled out General Rito Alejo Del Río as a particularly enthusiastic collaborator with paramilitary units, diverting a planeload of weapons and ammunition to paramilitaries in the Magdalena Medio region in 1985.

Another cable from 1998 – outlining how a Colombian general had accused the State Department of “betrayal” after US media outed him as a longstanding CIA agent – noted that Del Río’s “systematic arming and equipping of paramilitaries” in the mid-1990s “was pivotal to his military success at the time.” In 2012, he was convicted for arranging the murder of Marino López 15 years prior – a popular community leader of the banana-growing Uraba region, he was beheaded by a paramilitary death squad.

Since 2001, Washington has overtly provided billions in aid to Bogotá – a covert component of this windfall provides Colombia with extensive military and intelligence support. It’s been revealed that the CIA and NSA have played a pivotal role in numerous assassination programs targeting FARC leaders, with at least two dozen killed thanks to Langley’s “substantial eavesdropping help” and GPS equipment capable of transforming regular munitions into “smart bombs” in a dense jungle environment.

This high-tech weaponry was used to track down and assassinate top FARC commander Raul Reyes in one of the group’s secret camps in neighboring Ecuador in March 2008. Juan Manuel Santos, Colombian President from 2010 to 2018, has boasted of US intelligence’s “help” in equipping the army with “better training and knowledge.” This backing no doubt emboldened him to consistently refuse ceasefire offers from FARC, meaning military and paramilitary massacres continued even while high-level peace talks were being conducted in late 2012.

Given Washington’s level of knowledge of the Colombian Army’s collusion with paramilitary groups, it would be difficult for officials to argue that they didn’t foresee that this equipment would end up in the wrong hands, and be used to slaughter innocent civilians. In light of Jiménez’s conviction, White House legal apparatchiks may need to come up with a compelling defense on that point in short order.

Proving that he and his group had effectively acted “under color of law” – in other words had been sanctioned to commit crimes by the state – was a necessary condition for him to be tried under the US Torture Victim Protection Act. Based on the contents of the documents released by the National Security Archive, a great many other paramilitary actors, military operatives and government officials in Colombia may be next in line for prosecution.