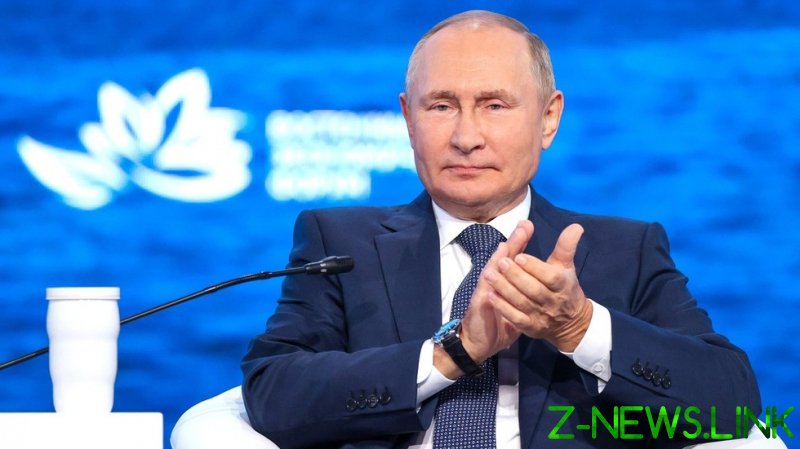 Among other things, he commented on the unfolding crisis in the global economy, which he attributed to the shortsightedness of Western elites. According to Putin, they are trying to cling to global power while it slips from their hands.

Here are some of the key points Putin made in his address.

The world is facing serious economic challenges, and unlike the impact of the Covid-19 pandemic, the current turmoil is the result of conscious decisions made by Western nations, Putin said. The West caught “sanctions fever” as it sought to impose its will on other nations.
According to the president, though this is nothing new, the current situation is marked by special circumstances – the US is losing its dominance in the global economy and politics, a “tectonic shift” that Western elites are not willing to acknowledge.

Elites are ‘lashing out’

“Western nations want to preserve the old world order, which benefits only them, to make everyone follow the ‘rules’ they invented themselves and which they regularly break or change to their benefit,” Putin said.
Resistance from other nations “makes Western elites to ‘lash out’ and take shortsighted cavalier decisions affecting world security, politics, and economics” he added.

Western leaders are ‘detached’ from their people

The policies adopted by the leaders of the US and its allies run counter to the public’s interests, which they are supposed to protect – this shows the Western elites are “detached from their own people,” according to Putin.
EU governments are a good example – they decided to decouple their economies from Russia, denying their businesses affordable energy and access to the Russian market, which makes them unable to compete, he said.

Putin predicted that American companies would lead the charge to capture the market shares of businesses based in the EU as a result. “When [the Americans] pursue their interests, they don’t limit themselves or shy away from anything.”

The global economic crisis will hurt vulnerable nations worst of all, according to the president – for many people, it’s a life-and-death situation, as impoverished countries will have no ability to buy crucial products.
Meanwhile, Western nations pretend they want to help while only doing what is in their own interests, as exemplified by the Ukraine grain export deal, according to Putin. Russia agreed to help ships loaded with grain to leave Ukrainian ports under an arrangement mediated by Turkey and the UN in July. However, most of the ships have gone to EU nations rather than struggling countries, the president said.

“Just two ships out of 87 were loaded [in Ukraine] under the UN Food Program, which works to provide assistance to needy countries… just 3% that were sent to developing nations.”
According to Putin, Western nations have decades and even centuries of experience in plundering colonies, and are using the same approach today. In order to prevent humanitarian disasters, Russia suggests limiting the destinations for Ukrainian grain to change the situation.

Russia is weathering the sanctions

Russia is dealing with the damage caused by the West’s “economic, financial and technological aggression” relatively well, Putin said. He noted that the country’s financial system had been stabilized, inflation is going down, and unemployment is at record lows.
Some companies were indeed hurt, especially those whose business depended on Europe in some way, he said. The Russian government has mechanisms in place to support them.

Most of the nations in the Asia-Pacific Region (APAC) reject “the destructive logic of sanctions” and seek to foster business ties and economic growth for the benefit of their people, Putin said. Russia appreciates players that share its attitude to national sovereignty. The abundance of countries like this in APAC is “its great competitive advantage” and a source of long-term development.

Russia did not start the conflict in Ukraine

When asked by the host for comments on how the crisis in Ukraine has affected Russia, he reiterated Moscow’s position that the conflict was forced upon it.
“We did not start anything in terms of military action. We are trying to end it. Military action was started in 2014, following an armed coup in Ukraine by those who did not want normal development and sought to subjugate their own people, carrying out one military action after another, and subjecting Donbass citizens to genocide for eight years.”
Russia decided to use military force eight years later. Doing so was a moral obligation to the people of Donbass, who Moscow could not protect through peaceful means, Putin said. In the end, Russia will emerge from the conflict stronger domestically and internationally, he added.