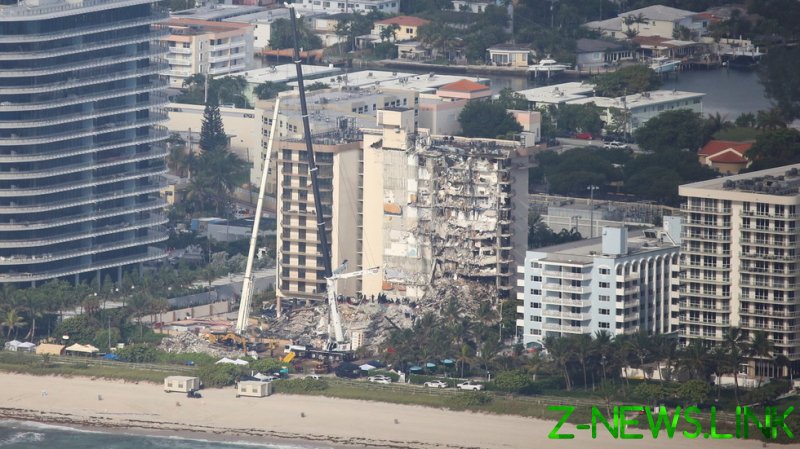 Miami-Dade County Mayor Daniella Levine Cava confirmed on Sunday morning that the number of confirmed deaths following the tragic collapse had risen to nine. One victim, pulled from the rubble on Thursday, died in hospital, and four more bodies were found overnight, bringing the total number of people found dead in the rubble to eight.

Sunday marked the fourth day of search-and-rescue operations since the collapse of the building. More than 150 people remain unaccounted-for, with fires and the poor structural condition of the building hampering rescue efforts.

“Our rescue teams are [working] non-stop, doing all that we can, searching every area,” Miami-Dade Fire Chief Alan Cominsky told reporters on Sunday morning. However, doing so while stabilizing the remains of the building is a “very, very slow process,” he added.

The cause of the collapse is still unknown, though an engineering consultant inspecting the building in 2018 found evidence of “major structural damage” to concrete, “abundant” cracking on columns in the parking garage, and poorly laid waterproofing below the pool deck that could cause “concrete deterioration,” the New York Times reported on Saturday.

The engineer declared at the time that most of the deteriorating concrete “needs to be repaired in a timely fashion,” and that doing so would preserve the “structural integrity” of the condo building.

As heavy machinery moved in to lift slabs of pancaked concrete, Levine Cava told reporters that sonar equipment and specially-trained dogs were being used to locate potential survivors. Florida State Fire Marshal Jimmy Patronis also said that fire crews had cut a 120-foot by 12-foot trench under the wreckage, to serve as a firebreak and give rescuers better access.