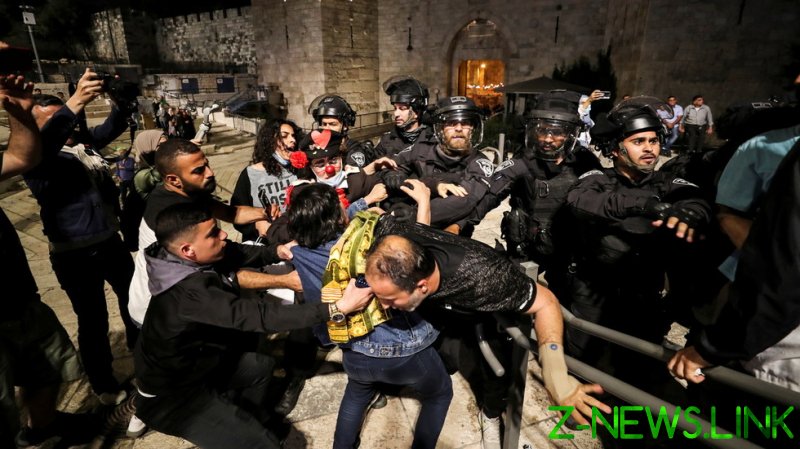 The events that transpired last Thursday night, after hundreds of supporters of the Israeli far-right group Lehava hunted Palestinians and attacked their properties in Jerusalem, were completely unpredicted. Palestinians throughout the Occupied Territories and even in Israel itself took to the streets to confront the attacks by settlers and the Israeli policies that have emboldened them.

However, the Western press has largely distorted the view of events that have taken place and not provided it with its proper context. The actions of the settler extremists worked as a catalyst for what has now been labelled by some Palestinian groups as the ‘Ramadan Intifada’, not as a standalone cause of the uprising.

Since the beginning of the month of Ramadan two weeks ago, Israel had imposed restrictions on Palestinians entering the third holiest site to Muslims, the al-Aqsa Mosque compound. On the first day of Ramadan, Israeli forces entered the al-Aqsa compound and cut the power to loudspeakers, blocking the Muslim call to prayer, so Jewish Israelis at the nearby Western Wall would not be bothered during a memorial service, in what was characterised by Hamas Spokesperson Hazem Qassem as “a racist aggression against religious sanctities and a violation of freedom of worship”.

Israel also placed barriers in front of the Damascus Gate entrance to the ‘Arab Quarter’ of Jerusalem’s Old City and prevented Palestinians from attending nighttime prayers in the al-Aqsa Mosque. These measures had led to clashes with Israeli police forces in the city throughout Ramadan. Then on Thursday, when Lehava took to the streets, a large group of Palestinians decided to confront the Israeli nationalist crowd and were attacked by the police, leading to 450 injuries over the course of two days, according to local media sources.

As pointed out by Israeli newspaper Haaretz, the double standards of the Israeli police were striking: on Friday, Israeli Public Security Minister Amir Ohan solely condemned the Palestinian violence and ignored that committed by the Israelis.

Lehava now feels emboldened, as if the government is behind them, with the leader of the far-right Otzma Yehudit (‘Jewish Power’) faction within the Religious Zionist Party, Itamar Ben-Gvir, having been elected to the Knesset. Ben-Gvir is a lawyer for Lehava’s leader and founder, Bentzi Gopstein.

For a long time, far-right religious extremists were outlawed from the Knesset, but with Prime Minister Benjamin Netanyahu facing corruption charges, and a political deadlock preventing him from forming a government, he is now relying on such groups.

Likely fearing a further escalation of Palestinian protest in Jerusalem and the West Bank, and rocket fire from Gaza, the prime minister called for calm in Jerusalem. But this call was not heeded by the head of the Religious Zionist Party, Bezalel Smotrich, who stated, “Maybe it’s time to replace Netanyahu”, in response to what he saw as a betrayal of the Jews.

In order to form a coalition government after yet another close election, Netanyahu needs the Religious Zionist Party, meaning his attempts to try to calm tensions with the Palestinians are being severely hindered. If he loses the far-right groups’ support, Israeli President Reuven Rivlin may ask the anti-Netanyahu bloc to attempt to form a government, but for now, this seems unlikely to happen, as that would require Arab parties to come together with right-wingers.

This means that, due to the unified Palestinian uprising, Netanyahu is being given an ultimatum: choose escalation or abandon your allies in the Religious Zionist Party and risk Israel heading  towards a fifth round of elections in just two years.

For perhaps the first time since the end of the Second Intifada, in 2005, Palestinians in East Jerusalem, the West Bank and the Gaza Strip are standing up together against Israel, across party lines, in a meaningful way.

The Palestinian question has been for too long forgotten when it comes to Israeli political discourse, because, other than the occasional rocket fire from the illegally besieged Gaza Strip, Israelis don’t pay much notice to the Palestinians. This has quickly changed, however, and pretty much overnight.

The Palestinian demonstrators have suddenly put the Israeli political system in check, and now the fate of Israel’s government could rest solely on how the Israeli authorities react to the Palestinians.

I spoke to Palestinian independent journalist Wafa A Al-Udaini, from the Gaza Strip, and photojournalist Hamde Abu Rahmah, from the West Bank, who explained the feeling at present as a revival of the national cause. The sense I got from them both was that something big was building.

The question has also arisen as to whether Palestinian Authority President Mahmoud Abbas might delay the first Palestinian elections in 15 years, due to Israel not responding to the request to allow East Jerusalem Palestinians to vote. If the elections are called off (which, in fact, look likely, due to fears of Abbas’s Fatah losing to Hamas), tensions could escalate further as Israel will be blamed for violating its commitments and blocking Palestinian democracy.

As the protests continue nightly and Israel calculates what it will do next, it is important to understand that this uprising is not merely a reaction to settler extremists. Just as occurred in 1987, when the First Intifada began, a single event worked to evoke the rage of an entire population suffering under occupation.

The settlement expansion, home demolitions, hardships faced under military occupation, the besiegement of Gaza and the discriminatory policies implemented in Jerusalem, which seek to displace as many as 2,100 people in the neighbourhoods of Silwan and Sheikh Jarrah alone this year, have led to this moment.

The protesters’ actions have ensured that the Palestinian question is once more at the forefront of the Israeli government’s mind. The ball is in Israel’s court and, depending on how it chooses to return the serve, the Palestinians will react.