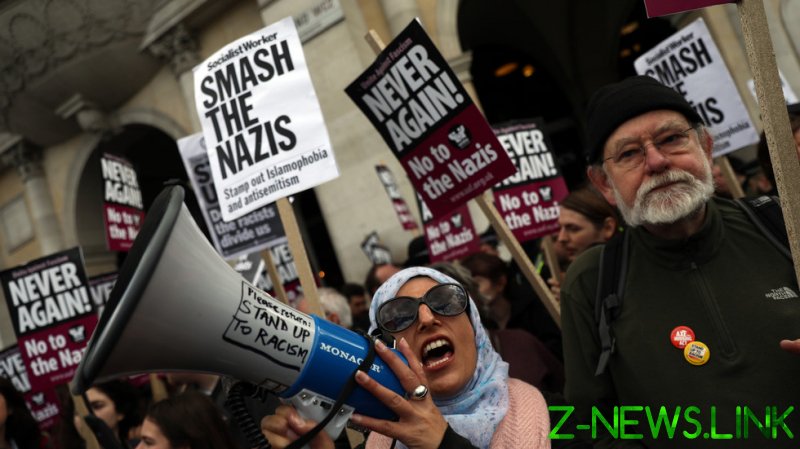 There was a curious sideshow to the thousands of people attending Saturday’s protests in London’s Trafalgar Square, organised by StandupX. It is a movement against face masks, which feels vaccinations aren’t safe and that human rights are being eroded by the “new normal”. Its membership is mixed, but more left-wing if anything.

But the image that gained the greatest reaction on social media was of two men with an unfurled flag bearing the symbol of the New British Union (NBU).

That group says on its website that it is ‘Restoring Faith in Fascism’. And it claims that the picture got 165,000 individual hits on its website in a single day, a rise in membership – although it refuses to supply actual figures – and an increase in sales of official merchandise.

So, is fascism about to make a comeback in the UK? RT spoke to the group’s leader, Gary Raikes. While his role is no secret, he was uncomfortable at the idea of conducting the interview by phone or in person, and with the media, he stated: “The press are not just biased, they actually lie.” So, we communicated by email.

Despite his reluctance to speak in person, he enthusiastically tweeted to his followers about the interview, advising them to look out for it.

Raikes describes himself as being involved in nationalism since 1974. Previously, he was the Scottish leader of the British National Party and stood unsuccessfully at the 2010 General Election, receiving 513 votes in the Aberdeen West constituency.

The NBU is not registered with The Electoral Commission, but this is part of its strategy; to join with other bodies and roll out more of its policies. Raikes told RT: “I think it will be in stages. We may be aligned with a nationalist party first before moving to all-out fascism. As most people are apathetic towards politics now and the way the world is going, it could well be within ten years.”

“No democratic government can fully deliver its manifesto promises; the people never get what they voted for. A fascist government would ask the people by the use of referendums what they want and deliver it.”

Although advocating the use of referendums, the NBU has a list of priorities. Within 12 months of coming to power, Raikes revealed there would be a complete halt to all immigration, a closure of the House of Lords, a defunding of the BBC, dismissal of the Human Rights Bill and the reinstatement of national service.

Many of these policies have been suggested by different parties and politicians at different times. For example, there’s a movement started by a university student and now supported by the likes of actor Laurence Fox to defund the BBC. Its Twitter account has 94,300 followers.

However, there are more extreme policies which the NBU advocates; a removal of all “politically correct” police chiefs, reinstatement of the death penalty and the deportation of all illegal immigrants.

The UK abolished the death penalty in 1969, but Raikes believes the public want that reversed. He explained: “They are overwhelmingly ready, the people want it re-introduced, politicians don’t – that’s the cost of democracy, I’m afraid. The death penalty will be up to the judge to impose or not, based on the evidence. Forensic science and DNA should ensure no mistakes are made.”

However, a current public petition on the British parliament website, which was launched in April, has 12,272 signatures. A petition requires 100,000 before Parliament debates it, but RT was told: “The government has no plans to bring back capital punishment. Parliament abolished the death penalty more than 50 years ago and has consistently voted against it being restored in recent decades.”

One major issue facing the NBU is the term ‘fascist’. It comes with a lot of baggage and is a social taboo. Raikes acknowledges this, but admits not all NBU members conceal their allegiance.

He said: “Some do more than others. The ignorance of the left wing concerning British history and the truth about fascism is staggering… admitting you’re a fascist to these people could lead to violence, dismissal from work, attacks on your family etc.

“We accept we have a mountain to climb in reintroducing British fascism to the everyday people of Britain, but we are prepared for the struggle. They want our policies, maybe not under the term of ‘fascism’, but we have to convince them of that.

“However, anything up to 70 percent don’t vote, people are sick of Lib-Lab-Con, as they realise that under them nothing will change. They are also being sold false hope by the establishment setting up of UKIP and The Brexit Party. As things get worse, and they will, people will turn to fascism and strong leadership.”

The claimed figure of non-voters reaching 70 percent doesn’t reflect official records. At the last general election, turnout was 67.3 percent. In previous contests it was 69.1, 66.2 and 65.1. While these numbers are fairly consistent, the turnout for European and local elections is far lower, often under 35 percent.

The NBU appears to see no hypocrisy in scrapping democracy but proceeding with referendums.

Raikes continued: “Democracy has failed. It’s a sham. We would hold a referendum every five years to ask the people if they wanted the fascist government to continue or not.”

And while some left-leaning figures regard Boris Johnson and his Conservative government as displaying fascist tendencies, Raikes is clear that Bojo would not feature in the fascist revolution. He said: “He is hardly fit to be the Prime Minister of our so-called democratic country, he could never be in a fascist government.”

There has always been a link between fascism and racism, with people of colour unwelcome. Raikes seems to confirm this is still the case, but with a careful use of words. He said: “Under present law we have to let black and gay people join. White people are not allowed to have inclusive groups. We are pro-white not anti-black, we stand for the white minority… in the world – with the right to exist as the majority in our own homeland.

“People’s sexuality should be their private business and not inflicted on the whole of society. Gay Pride parades are now just a show of degeneracy, our children are being groomed by transvestites in schools and the push to normalise pedophillia [sic] is well underway.”

It is horrifying to hear someone seeking to attract public support express such extreme views, but trying to dig deep and understand the ethos of the NBU is difficult. Raikes rattled off other initiatives it would introduce, but it all felt like a lot of buzzwords without any depth.

He continued: “The running of the NHS will be handed over to the people working in the NHS, free from the burden of overwhelming government bureaucracy and run as one of the national corporations.

“Education will have to change solely because of the infiltration of the educational system by liberal political agendas. Schools are no longer about teaching and informing, they are all about de-programming and re-programming.

“Also for younger homeless people we would vastly increase the numbers required to serve in our Armed Services.”

So, to re-ask the question that began this, is Fascism about to make a comeback in the UK? Judging by the prevailing climate and social attitudes, it’s unlikely we’ll see the NBU’s flag flying brazenly across the nation.

And that’s no bad thing. Fascism ended for a reason.