Dear US media, we don’t need Russia to attack our power grid, we’re perfectly capable of tanking it ourselves…just look at Texas 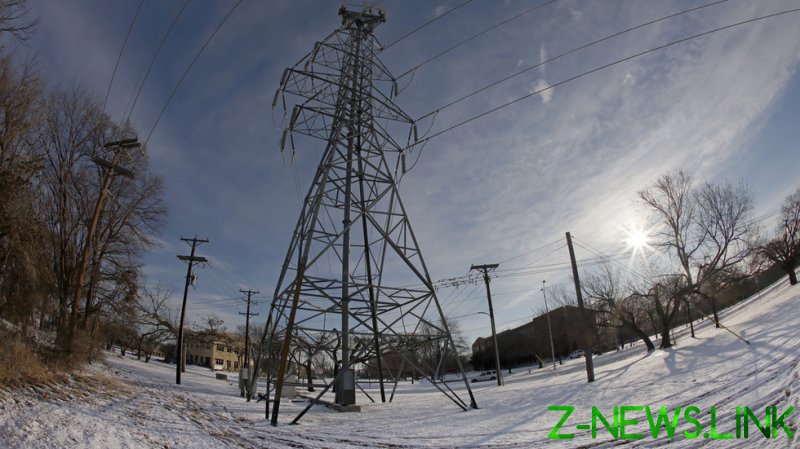 ‘Never let a good snowstorm go to waste’ appears to be the mantra of the moment as Texas suffers through a state of emergency. Amid freak weather conditions that sent temperatures plummeting across the country, leaving some three million Texans without power, Democrats are lecturing the Republican-run state for not adequately protecting their “outdated” fossil-fuel-powered resources. The Republicans are responding by blaming the crisis on “frozen windmills,” one of the left’s sacred cows representing a pollution-free world of endless free energy. Notice anything out of place?

Strangely missing from this latest descent into American madness is the global arch-villain, Russia. That is a rather surprising omission considering that the American people have been conditioned to believe that if they find themselves without heat in the dead of winter the most likely culprit is not an aging and dilapidated energy grid, or even an unpaid heating bill, but rather a ruthless gang of Russian hackers, most likely in the employ of Vladimir Putin.

By way of example, back in 2016, at the very same time that Barack Obama had just expelled 35 Russian diplomats for “undermining our election processes and institutions,” the Washington Post ran a sensational story entitled, ‘Russian operation hacked a Vermont utility, showing risk to U.S. electrical grid security, officials say’.

No less of a governmental authority than Vermont Governor Peter Shumlin (D) was quoted in the article as saying: “Vermonters and all Americans should be both alarmed and outraged that one of the world’s leading thugs, Vladimir Putin, has been attempting to hack our electric grid, which we rely upon to support our quality-of-life, economy, health, and safety…”

There was just one problem with that explosive accusation against faraway Russia: it was entirely predicated upon fake news and disinformation. Although the Post article is still freely available online without so much as a firewall, it comes with an editor’s note that reads, “An earlier version of this story incorrectly said that Russian hackers had penetrated the U.S. electric grid. Authorities say there is no indication of that so far. The computer at Burlington Electric that was hacked was not attached to the grid.”

One must wonder what would happen in the event that the US media, after publishing some similarly unsubstantiated piece of derangement, finds itself responsible for dragging the world to the precipice of World War III because some people lost their heat in Spokane. Would anyone bother to read the buried editor’s note that finally sets the record straight before the missiles start flying? But I digress.

Fast forward to 2019, and the US media was in full-blown anti-Russia manic mode. After all, US presidential elections were fast approaching. In February, amid a different cold spell that swept across the nation, MSNBC host Rachel Maddow didn’t miss an opportunity to ratchet up Russophobia by asking her millions of listeners: “What would happen if Russia killed the power in Fargo [North Dakota] today? What would you do if you lost heat indefinitely as the act of a foreign power on the same day the temperature in your backyard matched the temperature in Antarctica?”

Oh, I don’t know, Rachel, what should I do, aside from freeze? Sit down and write a letter to my congressman?

Had Rachel Maddow been your average media hack, working for some obscure backwater publication, then perhaps such a bone-chilling rhetorical question could be excused as gross unprofessionalism and journalistic immaturity; the work of an amateur fresh out of journalism school. After all, Moscow has never – not even during the height of the Cold War – made the cold-blooded decision to turn off Europe or America’s energy supplies, not in the summer nor in the dead of winter. Yes, there have been arguments over energy payments, specifically with Ukraine, but that is not the same thing as deliberately freezing people to death in their homes. If Rachel Maddow was unfamiliar with that information, that makes her a lousy journalist; if she was familiar with it, yet didn’t feel the need to mention it, that makes her an irresponsible hack with a heavy political ax to grind.

As host of the eponymous The Rachel Maddow Show, the liberal television commentator is one of the most prominent media figures in the United States, with millions of people tuning in nightly to her program. Since Maddow must be aware of her profound influence, which has no small effect on the state of relations between the world’s two preeminent nuclear powers, one would expect to find a hint of objectivity, a modicum of journalistic integrity before she serves up her latest cold dish of Russophobia. Unfortunately, and potentially tragically, there is none of that much-needed balance. When it comes to reporting on Russia, all Western journalists operate with the understanding that they can take tremendous liberties as they please.

Somehow in the world of US journalism and global geopolitics this loathsome treatment of an entire nation has become the accepted norm, to the point where a veritable hate campaign – shall we call it ‘racism’ – has been conjured up out of the blue against Russia. In fact, it’s almost worth pondering if even the Jews have historically suffered a more negative press than the Russians, especially in these modern times. I’m guessing at this point it’s about a toss-up.

In any case, since there is already a heated debate underway in the US over who or what is to blame for the rolling blackouts, perhaps it might also be a good time to reflect upon the unfair treatment that has been leveled against the Russian people. After all, Russians have some experience with intemperate weather conditions and they certainly appreciate the importance of staying warm in the winter. Dreaming up some fantastic scenario where Russia magically switches off America’s power grid is not based on precedent or historical experience or even plausibility; rather, it is based on propaganda and cheap lies which only serve to drive up the level of distrust between America and Russia by journalists who really should know better. Before global warming in geopolitics gets any worse, best to treat Russians with the same journalistic scrutiny and integrity that all people deserve.