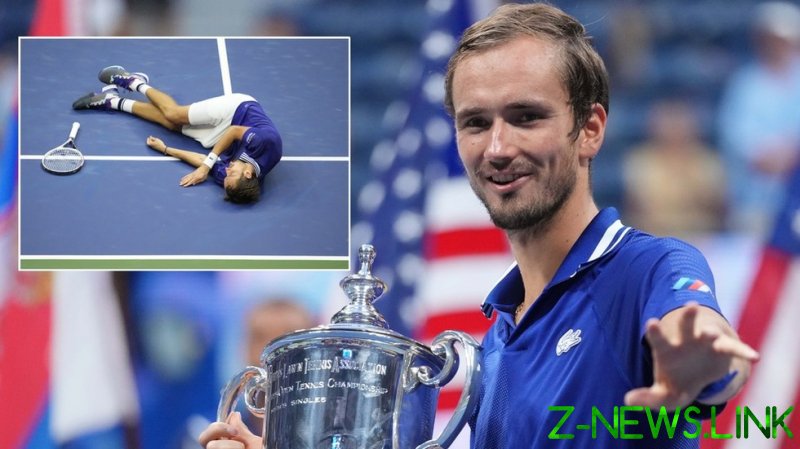 Denying world number one Novak Djokovic the chance to become the first player since 1969 to sweep a calendar Grand Slam, Moscow-born Medvedev clinched a well-deserved $2.5 million in prize money by seeing off the Serb.

Doing this in three sets with identical scores of 6-4, Medvedev did not go for any of the usual fare when tennis players realize their wildest ambitions.

There was no immediate raising of the hands or dramatic falling to knees.

Instead, Medvedev baffled by simply throwing himself on his side, lying prone on the floor as his wife looked on, before then heading to the net to shake hands with Djokovic and pay his respects as they embraced.

Reacting to the fall, internet users left a litany of replies in the comments section to posts that shared the viral clip with remarks such as: “LMAO! Why did he pass out like that?”

As the man of the hour explained himself, though, the celebration is known as the “dead fish” and is actually inspired by the widely-popular FIFA football video game.

“When I was running through [the draw at] Wimbledon…I was really confident about my game,” he explained at a post-match press conference.

“I think it was one night, you know, you cannot fall asleep. Five, 10 minutes you have crazy thoughts, like every other person.”

“I was like, OK, if I’m going to win Wimbledon, imagine I win it against Novak or whatever. To not celebrate is going to be too boring, because I do it all the time. I need to do something, but I want to make it special,” Medvedev went on.

“I talked to the guys in the locker [room], they’re young guys, super chill guys. They play FIFA. They were like, ‘That’s legendary’. Everybody who I saw who plays FIFA thinks that’s legendary. That’s how I wanted to make it… It’s not easy to make it on hard courts. I got hurt a little bit, but I’m happy I made it legendary for myself,” Medvedev finished.

While Medvedev crashed out at SW19 via a shock fourth round loss to Hubert Hurkacz, he did of course finally get to execute his plan through his triumph in New York last night.

On Twitter, he confirmed that he had woken up to “so many funny messages”, and challenged his followers to share their “best deadfish celebrations”, as others referred to it as “the salmon” or “brick fall” and identified the very button combination needed to pull it off on FIFA.

Elsewhere, he has also had a Medvedev number 1 jersey made in his honor by German giants Bayern Munich.