Home / Society / Deacon Andrei Kuraev: “the ROC was breaking into society through the back door…”

Deacon Andrei Kuraev: “the ROC was breaking into society through the back door…” 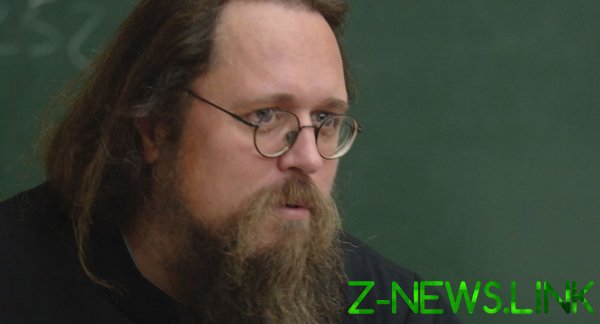 The Moscow Patriarchate is trying to expand its sphere of influence not open to missionary activity, and secret agreements with the authorities.

Convincingly and exhaustively explained the nuances of the policy of the Russian Orthodox Church deacon Andrey Kuraev:

“When a kid comes in a new men’s team (barracks area, a new classroom, backyard…), which was formed before his appearance, he solves the problem of their status in the local hierarchy.

He knows that he can be allowed. What jokes and tricks support staff like the senior who can be hurt, and with whom to prijateljstva not just because of his low status. What “violation of the law” closes her eyes or even smiles indulgently teacher-commander-Brigadier. And for that beat face without warning.

A beginner goes through trial and error. He puts elbows, recaptures a little more “personal space”. Carefully pushing in all directions, being ready immediately to take back, if you meet some tough resistance.

Actually, I described the tactics the return of the Russian Church in the public space after the Soviet time.

For Alexia, this probing and provocation was softer and not first-person. Cyril decided to go ahead. His choice. But then it is not necessary to inquire in bewilderment “and us for what?”.

No, not for faith in Christ Crucified. Not for the beautiful prayers in Church Slavonic. And not even for criticizing gays.

But for the incessant attempts to penetrate in the secular space, and through the back door. Black move is a tacit agreement with the authorities.

When this extension goes openly through the missionary reasoned and oppressive dialogue with people is one thing. And when students are driven to have boring blablabla bishops of the speakers is another.

Controversy, even tough is one thing. But “DUSHECHKA” and arrests of cultists is another.

The channel for the believers, fine. The ban on criticism of the Church’s life in the public media requires a different evaluation.

The publication of his books normally. Censorship of secular publications, concerts, operas, movies abnormal for the 21st century.

This is the basics of asceticism: evil is not out of place in time and realized good. By itself, the temple is a little one Allergy. But if the methods of its construction is not as beautiful as its video presentation, people say “no”.

In Yekaterinburg squareframe history tripped a Newton’s law. The action caused a reaction. That pressure reached critical levels, evident from the fact that after Ebola began to close the controversial temple projects in other cities (Krasnoyarsk, Tambov…).

A survey of MSU students showed that from 12 to 18 years, the number of those who consider themselves Orthodox, fell by almost half (from 54 to 31 percent). At other universities the recession is also marked, but it is not as sharp. Perhaps among the reasons – “replacement Kuraev Novikov” ?

Even in superlearner MGIMO (went there the other day on Stolypin forum) Orthodox students complain that their classmates have become characteristic of severely anti-clerical attitude.

That’s hardly surprising. Recently a journalist made me think, why the Communists in the 1970s, the years have softened his attitude to the Church.

I said sorry a goner. The Church of those years was an obvious disabled person. Because the argument of its defenders was strong: it’s our mother and grandmother. On their shoulders they carried the war, famine and devastation. Well, why are they at the end of to suffer for years and even in the temple? Why hold them there the stuffiness and crowding? They are politically loyal and harmless. To re-educate them later. Young people, they are not interested. So why take away their temple?

Chosen on the street skinny and lousy kitten warmed, fattened. And he grew up in tiger with undisguised cannibalistic (inquisitorial) appetites. And it requires so that it is still Lisp and fondly scratched his belly. And if you allow yourself to criticize something just for sneakers: “he’s so cute! He loves me so much that if I leave the house, he has a vendetta against me for treason and wrote to me in sneakers!”.

Before Patriarch Kirill had a choice: to convince or to subdue. And in inter-Church relations, and in “external relations”, he chose the latter. Message at the tone “powers”, which does not give, and urges. With beating air with his fist of the right hand in time to his speech.

The main mistake of this style – forgetting that in nature and in the circumstances of this age, twenty-first, faith in Christ can be the only option.

This thesis can be challenged. The counter-arguments already made and announced. I’m not going to hide them and give a link to them:

Fyodor Dostoevsky “The Brothers Karamazov”. The Chapter where the word is given a Grand Inquisitor and not given to Christ…”