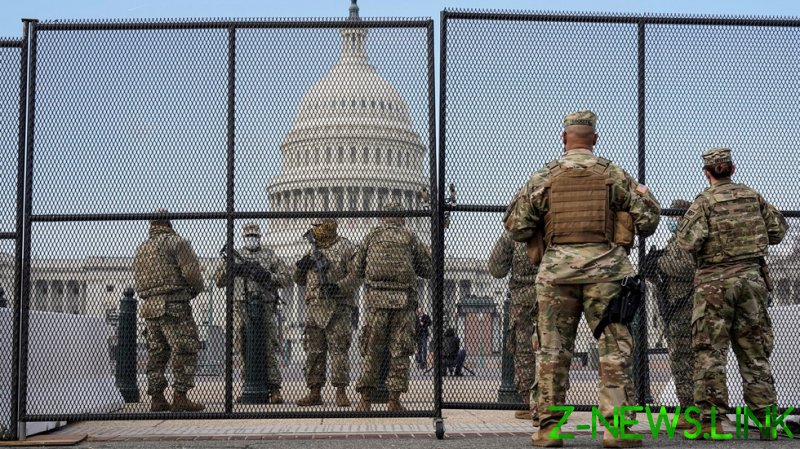 Several thousand troops and fencing topped with razor wire around the US Capitol – deployed after the January 6 riot – ought to stay in place at least through the end of March, lawmakers were told on Thursday. According to a report in Newsweek, Capitol Police were alarmed by online chatter by followers of the ‘QAnon’ conspiracy saying that former President Donald Trump will be inaugurated on March 4.

“Trump isn’t getting reinstated until after he wins the 2024 election,” quipped Congressman Matt Gaetz (R-Florida), a close ally of the former president. “Also, does this strike anyone as possible threat construction to justify the ongoing occupation of Washington DC?”

His sentiments were quickly seconded by Rep. Thomas Massie (R-Kentucky), a libertarian-leaning Republican.

“De-occupy DC. Send our great soldiers home. There is no threat, but the swamp wants to project that image so they can pass new laws to steal your liberty,” Massie tweeted on Thursday evening.

Several hundred Trump supporters broke into the main Capitol building on January 6, as Congress met to certify the election of Democrat Joe Biden as the next US president. One of the protesters was shot and killed by Capitol Police. Four other deaths – including a Capitol Police officer – were attributed to the riot, leading to Democrats and most mainstream media to characterize it as a deadly “insurrection” and accuse Trump of “inciting” it. They attempted to impeach him for it, even after he left office on January 20.

Some 27,000 National Guard troops were sent to Washington, DC in the aftermath, as the media cited an alleged FBI memo about potential “uprisings” across the country. None materialized, however, but some 7,000 troops stayed on guard long after Biden’s inauguration.

Acting Capitol Police Chief Yogananda Pittman has called for the fencing and other security measures to become permanent, over the objections of Muriel Bowser, the Democrat mayor of Washington, DC.

The newest pretext for maintaining the military presence is chatter by so-called “sovereign citizens,” who allegedly argued that every US president since Ulysses S. Grant has been illegitimate and that Trump will be inaugurated as the 19th – rather than the 45th – chief executive on March 4, the traditional inauguration date before it was moved to January 20 in 1933.