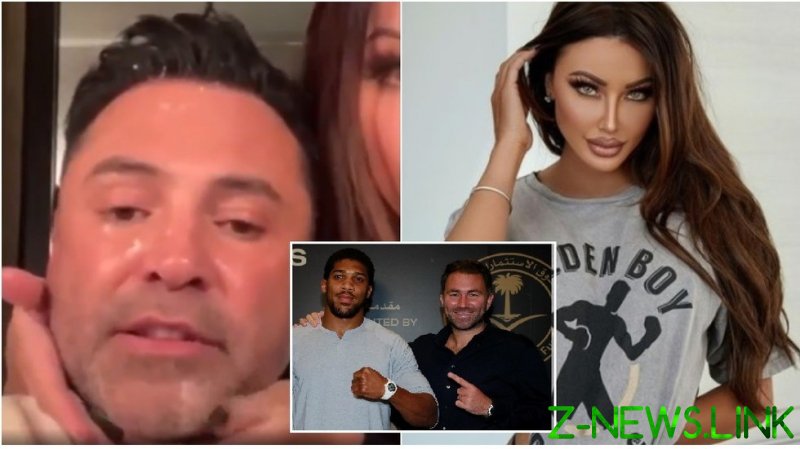 The former six-weight world champion was reacting to Hearn’s latest show, headlined by Joshua and Oleksandr Usyk while enjoyed by 65,000 punters at Tottenham Hotspur’s stadium, and pretended not to know his name while rambling through the livestream.

“I’ll tell you one thing the, uh…” De La Hoya begins, before asking for confirmation from Sonders on the fighters.

“Joshua versus Usyk, which nobody saw in the US, because…”

“What’s that promoter that doesn’t know how to.. that has no clue of what to do in the US? I think his name is Hearn or something,” De La Hoya adds.

“Stay in the UK. Promote your fights. You have no clue what you are doing in the US. DAZN is doing the right thing by sticking with Golden Boy.”

“Stay away from the US,” De Lay Hoya also says.

“He does not know how to promote in America – Usyk crowned himself world champion and Eddie Hearn ruined Joshua’s career,” he finishes, regarding the Ukrainian’s points win that relieved the 2012 Olympic gold medalist of his heavyweight straps.

What makes De La Hoya’s rant even stranger is that he likely knows full well who Hearn is, with the promoter practically running British boxing and also being involved with the likes of Mexican megastar Saul ‘Canelo’ Alvarez.

As implied, Golden Boy Promotions has an exclusive deal with DAZN to show the bouts of fighters such as lightweight and welterweight contenders Ryan Garcia and Vergil Ortiz, but so too does Matchroom with their agreement recently boosted for a further five years in July for a reported $135 million.

Yet this does not make them rivals by any means.

Above all, De La Hoya is perhaps bitter over having lost pound-for-pound king ‘Canelo’ to Hearn.

Despite him not signing directly with Matchroom, the Mexican’s last few fights have been promoted by the UK firm, and the two parties will also move forward together for his upcoming super middleweight unification meeting with Caleb Plant on November 6 in Las Vegas.

Perhaps De La Hoya should focus on his own affairs, and getting face messages from Sonders whenever he can.

Rumored to have shacked up earlier this year, after meeting at a boxing event in June, the pair struck up a union after Sonders broke off her engagement to sports betting consultant Dave Oancea known as ‘Vegas Dave’.