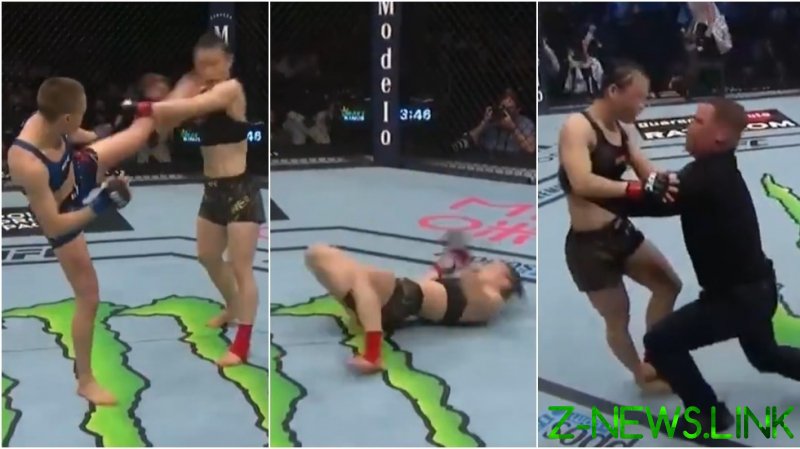 Namajunas connected flush with Zhang’s head inside the first round at the VyStar Veterans Memorial Arena in Florida, felling the Chinese fighter before following up with ground strikes as the contest was waved off.

The stunned and unsteady Zhang remonstrated with officials as she appeared to insist she had been fine to continue, but the dethroned 115lbs champ had offered no defense as Namajunas hammered away at her head after sending her crashing to the canvas.

Namajunas offered Zhang her hand in a moment of reconciliation as the defeated fighter sat on her stool, following a build-up to the bout which was marred by ‘better red than dead’ comments from Namajunas towards her rival from the communist nation.

However, the overriding emotion for Namajunas was one of joy at recapturing the title she had held before losing to Jessica Andrade at UFC 237 in May of 2019.

“I did it again… I really just had to have faith in God, and that’s what got me through.” Namajunas told Joe Rogan afterwards. “I am the best.”

For a stunned Zhang it snapped a remarkable winning streak of 21 fights, as she suffered only the second defeat of her professional MMA career and a first inside the UFC octagon.

UFC matchmakers will be licking their lips at the talent at the top of the 115lbs women’s ranks, with the possibility of handing Zhang a direct rematch with Namajunas – as Dana White strongly hinted at on Saturday night – or pitting the Chinese star in a contest for a number one contender spot against former foe Joanna Jedrzejczyk.

Zhang and Jedrzejczyk put on a barnstorming fight of the year at UFC 248 in March of 2020, and that could be the fight to make to determine who gets a shot at the belt now around the waist of Namajunas.

Namajunas’s previous reign as strawweight champion began in similarly spectacular style when she knocked out Jedrzejczyk at UFC 217 in 2017, although she would defend the title just once – in a rematch with the Pole – before losing it to Andrade.

The Milwaukee-born star will target a longer reign this time around, and is once again the woman to beat at the pinnacle of the talent-stocked UFC strawweight ranks.