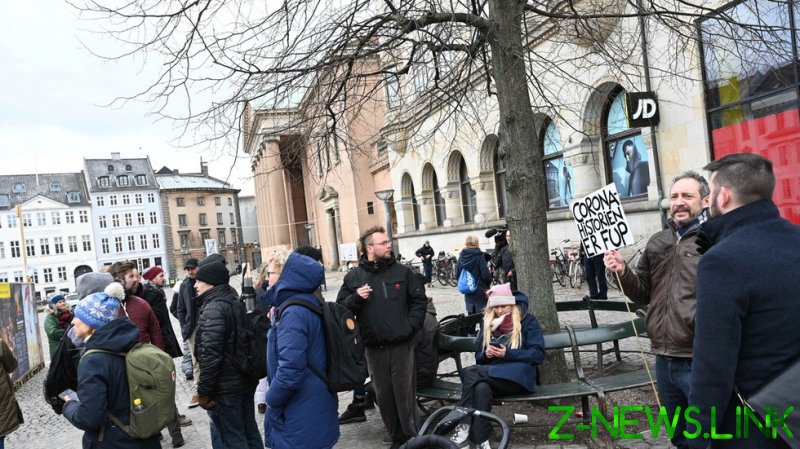 The unusually harsh ruling was announced by the Copenhagen court on Friday. The defendant, a 30-year-old woman, was found guilty of making offensive statements that contributed to a “gross disturbance of public order as well as the use of violence against police” during an anti-lockdown protest in early January.

“Are you ready to walk around and smash the city in a non-violent way?” she addressed the crowd outside Copenhagen’s City Hall during the protest. “The people in parliament. Smash the system.”

The woman, who has remained in custody since January 28, pleaded not guilty, while her attorneys called for an acquittal. However, the court argued that the “non-violent” part of her statement did not count, as the defendant reiterated her call to “smash” things twice.

The January protest ultimately devolved into clashes between the anti-lockdown marchers and law enforcement. The police were shot at with fireworks and pelted with various projectiles, while several protesters were arrested during the turbulent event.

The hearings sparked a new, smaller protest outside the court with dozens showing up to condemn the trial. The crowd booed at the police, as well as the prosecutor as he left the building after the hearing.

Under normal circumstances, the woman’s offenses would have seen her get up to one year behind bars. But she became the first protester to get hit by a controversial Covid-related rule, adopted in Sweden late in 2020 in response to scams and several thefts of face masks and hand sanitizer at hospitals. According to the provision, the country’s courts can double sentencing if an “offense has a background in or connection with the Covid-19 epidemic in Denmark.”

The application of the new rule to the woman’s case has already come under fire from several Danish politicians, who condemned the punishment as too harsh and the whole double sentencing provision as absurd.

“Completely insane to get a doubled sentence for corona critique. You shouldn’t have to fear a double punishment for demonstrating against the government,” central-left MP Kristian Hegaard said on Twitter.

A former minister of economy and interior, Simon Emil Ammitzboll-Bille, who is currently an independent MP, slammed the verdict as too harsh as well, arguing that far worse crimes yield smaller jail terms.

“There are people who have received less for incest and violence against children. Denmark, I’m ashamed!” the politician stated.