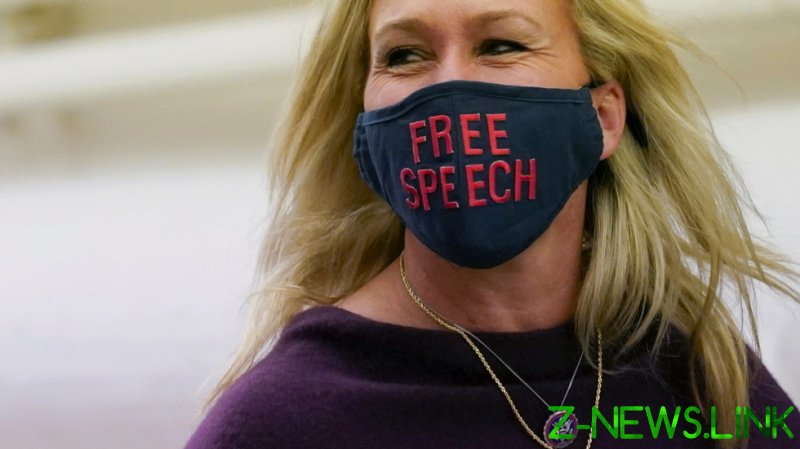 Greene was removed from the Budget and Education and Labor committees on Thursday afternoon. Democrats have accused her of online “hate speech” and supporting conspiracy theories such as QAnon while she was a private citizen, and claimed she represented a danger of “harm” to other members of Congress and Americans.

While the earlier procedural vote broke 218-210 along party lines, eleven Republicans sided with the Democrats in the final vote of 130-199 to strip Greene of her committee assignments.

In a speech on the House floor, Greene expressed regret over comments made prior to her election, but said she “never once said any of the things that I am being accused of today during my campaign,” or since being elected to Congress.

While declaring the comments Greene made prior to her election “completely inappropriate” and deserving of condemnation, the House Republican leadership nonetheless urged their members to vote against her removal, saying that it would set “a dangerous new precedent.”

“The resolution before the House today is not about the comments Representative Greene made in the past but is instead a further infringement upon minority rights which will have a lasting and damaging impact on the institution,” the leadership wrote in the instruction.

This was a step beyond House Speaker Nancy Pelosi (D-California), who denounced McCarthy on Wednesday as “Q-California” and accused him of “failure to lead his party” and “handing the keys over” to Greene, whom she described as an “anti-Semite, QAnon adherent and 9/11 Truther.”

Speaking on the House floor, McCarthy accused Democrats of hypocrisy and double standards, bringing up the past statements and behavior of representatives like Ilhan Omar (D-Minnesota), Maxine Waters (D-California), and Eric Swalwell (D-California), who were all rewarded instead.

“This is the least productive Congress since last year,” McCarthy pointed out, calling the Greene discussion a “distraction from the real issues” such as helping Americans who lost their jobs. He urged Democrats to “stop trying to find dangerous and divisive ways to abuse the power of the majority” and said they may live to regret the new standard they are creating “a lot sooner than you think.”

While Greene has been the focus of negative attention from the media and Democrats over the past several weeks, there is little to suggest her removal will be the end of it. Several Democrat members of Congress have already claimed the mere presence of “people with guns” like freshman Rep. Lauren Boebert (R-Colorado) makes them feel unsafe.