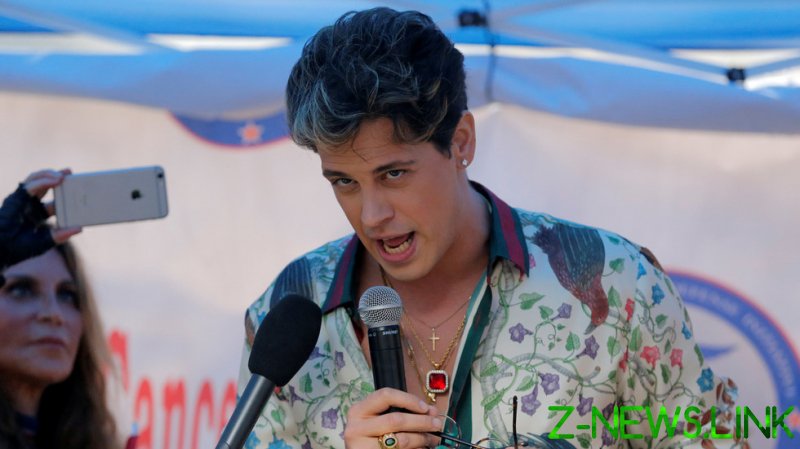 Yiannopoulos, the conservative author, philosopher and now the world’s most famous ex-gay, has outraged his detractors by going to Hawaii to cast into the ocean what he calls the Sodomy Stone – a four-carat diamond worth $150,000 which he bought as an engagement ring for his marriage to another man.

In a piece to camera, he is seen on a chartered boat holding a Cartier jewellery box. He tells us that he “prayed and drank an enormous amount of vodka” – only Milo could say that – and reminded himself that “nothing beautiful or true can be made or grow on a foundation of wickedness” before tossing the ring into the sea.

The wickedness was a union that Milo now regards as “infernal.” The trappings of his former life (he once did a speaking tour under the title ‘The Dangerous Faggot’) had to be gotten rid of – accompanied by a Celine Dion soundtrack.

“It was a lie that I could be a culture warrior for the right and a sodomite at the same time,” Milo, whose husband has been ‘demoted’ to the status of housemate, tells us.

Not since Coco Chanel was on the Duke of Westminster’s yacht and tossed overboard a ruby as big as a hen’s egg that he had given her, has there been such speculation and outrage.

In Milo’s case, it is coming from the left. It seems that one can aspire to any of the one hundred sexual identities on offer so long as it is not heterosexual.

As one angry critic fumed: “We knew it from the start. He was never homosexual. He was always a rightwing straight white male’s parody of what a gay man would be like.”

Social media has been electric with disapproval at Milo’s opinions, in which he states unapologetically that God created us male and female. He says: “‘Born this way’ is a slogan invented by the gay lobby. It is basically PR and has no basis in science  ‘Born this way’ is a lie. It is not a lifestyle. It is a set of symptoms. We don’t have a healthy and proper respect for the family. We are not drilling people that the nuclear family is the best engine of healthy, happy people.

“If you tell people that this is who you are and what you are and send them messages that there is something morally good about it, then homosexuals are celebrated as though there is something intrinsically preferable about being gay. This is just one of the sick things that culture does. These lifestyles will suck you into misery, into drug-taking, prostitution, pederasty and promiscuity.”

Milo believes that it is white liberals who ruin the world, citing organisations such as Drag Queen Story Hour and Gay Pride.

He is moving to Florida to open a clinic for people who want to be cured of same sex attraction, saying he has been overwhelmed with messages from people wishing to follow his example of declaring himself to be an ex-gay.  “The reason people aren’t opening clinics for gays to come out of this lifestyle is because the cultural pressure is horrifying,” he says. “These ideas aren’t permitted.”

Milo sees the clinic as the great moral duty of the next decade of his life: “America is structured to reward conformity, mediocrity and predictability. It doesn’t accommodate free thinkers. Those who don’t go with the mainstream narrative will get crushed. There is no willingness to go against cultural norms.”

Thousands of gay men are writing to him. They feel that they have buried their true feelings about their sexual choices and want to talk to him.

The mythology of America has clashed with what he has been living for the last half decade. Milo has been in “enforced retirement” because he has been cancelled countless times. Rioting mobs have prevented him from speaking at, amongst other places, Berkeley.

So much for the first amendment.

He had time to think and became closer to his Catholic faith. He came to realize that the experience of committing certain acts in his private life were making him unhappy. In 2018, he wrote “Diabolical” about the way Pope Francis has been betraying the victims of pedophilia and protecting the clergy who committed these abuses.

Milo’s clinic (for Reparative Therapy rather than Conversion Therapy in order to avoid lawsuits from the left) will seek to educate and help people move away from homosexuality. He believes Governors that have made such therapy illegal are akin to those who issue mask wearing mandates and peddle fictitious statistics about Covid-19 and the trustworthiness of the WHO.

“Tell people the truth. Let them make up their own minds. Don’t force them to only hear one point of view,” he says. “At this clinic we will publish research and build an auditorium so I can give speeches.” According to Milo, the last election was proof that conservatives and the left live in different fact universes.

He is writing a book which will be called ‘Make America Hate Again.’ “We have lost our understanding that it is right and proper to hate hateful things,” he argues. “We need a kind of rehab for our natural instincts of righteous indignation. It is about ordering our affections. Loving the things that God loves. Hating things that are wrong. We are told that any kind of hate is intrinsically unacceptable.”

Groups on the left such as The Southern Poverty Law Center and The Anti-Defamation League claim to be dedicated to defeating hate. So do Black Lives Matter, the LGBTQ movements and Antifa. In truth they are more about wiping out the people THEY hate. We live in a society which values tolerance – or claims that it does. It claims to love tolerance more than courage or integrity or compassion or truth.

“It has been decided that none of us can hate anything,” Milo explains. “Yet these people are utterly lacking in mercy. They have no space for forgiveness. Cancel culture is all about demonstrating that there is no forgiveness, let alone tolerance in their souls. Cancel culture is nothing if not atheist cultural Marxism.”