Home / WORLD / Damned if you do: Russia has nothing to gain by cutting off ties with Ukraine. But, sadly, talking to Kiev doesn’t help either

Damned if you do: Russia has nothing to gain by cutting off ties with Ukraine. But, sadly, talking to Kiev doesn’t help either 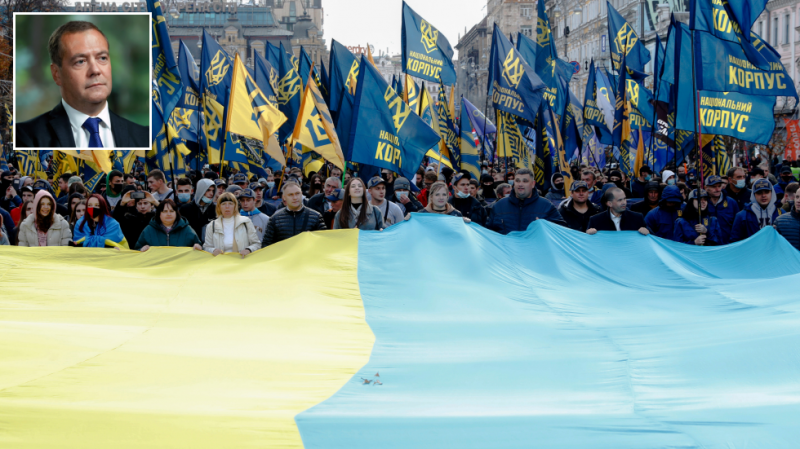 ‘Nedogovorosposobnyi’ is a Russian word with no English equivalent, describing somebody or something that is incapable of reaching agreements. There can be many reasons why a person or an organization is like this but, whatever the cause, talking to them is a waste of time. It’s never going to get anywhere.

Ukraine’s political leaders are nedogovorosposobnye, says Medvedev, who was president of Russia from 2008 to 2012 and now serves as deputy chairman of the Security Council. In a blistering article published in the newspaper Kommersant on Monday, Medvedev assaulted Ukraine’s leadership and laid out four reasons why speaking to them was pointless.

First, Ukraine’s leaders “lack a firm self-identification.” The country’s president, Volodymyr Zelensky, has “specific ethnic roots” as a Russian speaker, says Medvedev, but “out of fear of another ‘Maidan’ directed against his own power, has completely changed his political and moral orientation. In essence he has rejected his own identity.” It’s like “representatives of the Jewish intelligentsia in Nazi Germany being asked to serve in the SS,” Medvedev concludes, a particularly incendiary statement given that Zelensky is himself Jewish.

Second, says Medvedev, “this generation’s Ukrainian leaders are people completely lacking in independence,” and they are utterly dependent on their American masters.

Third, these leaders are “weak people, concerned only with filling their pockets. … There are no leaders willing to sacrifice themselves for Ukraine’s sake … and for now, it seems that there won’t be.”

And fourth, Ukraine’s rulers are “ignorant and unobliging. They continually change their position in accordance with their transatlantic masters and political circumstances.” They are “crude Talleyrands,” says Medvedev, referring to the notoriously unprincipled and flexible revolutionary era French diplomat, Charles Talleyrand.

The upshot, according to Medvedev, is that “Contact with such people is not productive. … negotiations with them are absolutely pointless.” Instead of trying to strike a deal, Russia should simply do “nothing”, Medvedev argues. It should “wait for the appearance in Ukraine of a responsible leadership, which doesn’t aim for total confrontation with Russia … Only with such a Ukrainian leadership is it worth doing business. Russia can wait. We are patient people.”

The harshness of Medvedev’s language is unprecedented from a senior Russian official. The former president has long been considered a relative liberal compared to President Vladimir Putin, although it should be borne in mind that it was he who, not Putin, was in charge in 2008 during Russia’s war with Georgia. If even Medvedev has lost all patience with Ukraine, then you can be sure that the same is true of most of the rest of the Russian political class.

We don’t know who Medvedev consulted before publishing this piece. It seems most unlikely, though, that he was working at cross-purposes to the rest of the Russian government. Indeed, Kremlin spokesman Dmitry Peskov declared that the article was in total accord with the government’s position. That said, it’s noticeable that the Russian state continues to express a willingness to engage in dialogue with Kiev. In that respect, Putin is perhaps rather more moderate than those around him.

This is a point often lost in the West. Were Putin to leave office, it’s most unlikely that a more pro-Western leader would take his place, or that his successor would cave in to foreign demands concerning Ukraine. On the contrary, the successor might well take an even harder line.

The reason is simple. Efforts to end the war in Donbass in eastern Ukraine have come to nothing. The basis for ending the war is the Minsk II agreement of February 2015. This requires Kiev to grant “special status” to Donbass and give an amnesty to those involved in the rebellion. It also calls for local elections in the region, after which control of the border with Russia will be handed back to the Ukrainian authorities.

Kiev, however, insists that it will grant neither autonomy nor an amnesty. It also demands the immediate disarmament of the rebel forces, and insists that it must receive control of the border not after elections but before them. In essence, the Ukrainian government rejects the Minsk agreement and demands the unconditional surrender of the rebel forces.

All this explains Medvedev’s letter, which is a clear response to the immense frustration that Russia feels regarding what it considers Ukraine’s intransigence. It’s a frustration that the Kremlin feels also with respect to the United States, as revealed by the failure of talks in Moscow this week between Russian officials and US Under Secretary of State for Political Affairs Victoria Nuland. The Americans “aren’t listening to us,” complained Russian Deputy Foreign Minister Sergey Ryabkov.

Given the inability to make any progress through negotiation, the temptation to break off talks and wait until a more amenable foreign government comes along must be great. The problem with Medvedev’s recommendation, however, is that there is absolutely no prospect of more friendly administrations appearing either in Washington or Kiev.

In part, this is a problem of Moscow’s own making. The takeover of Crimea and subsequent support for the rebel Donetsk and Lugansk People’s Republics in eastern Ukraine have cemented elite opinion in Ukraine firmly against Russia. It has also created a generation of security officials whose careers have been built on fighting Russia. The dynamics of Ukrainian politics have pushed pro-Russian elements to the margins; the country’s intelligentsia is firmly attached to the nationalist agenda; and opposition forces are fragmented and weak.

Even if a less hostile person was to be elected president, he or she would soon find that what one might call the Ukrainian “deep state” would push him or her into an anti-Russian position. This is what happened to Zelensky. There is no obvious reason why the same thing won’t happen to his successor and to his successor’s successor.

In short, waiting isn’t really an option for Russia, as waiting won’t make anything any better. And that puts Russia in an impasse. Talking won’t work; but sitting around hoping that things spontaneously improve by themselves won’t work either. Medvedev has diagnosed the problem. A solution remains to be found.