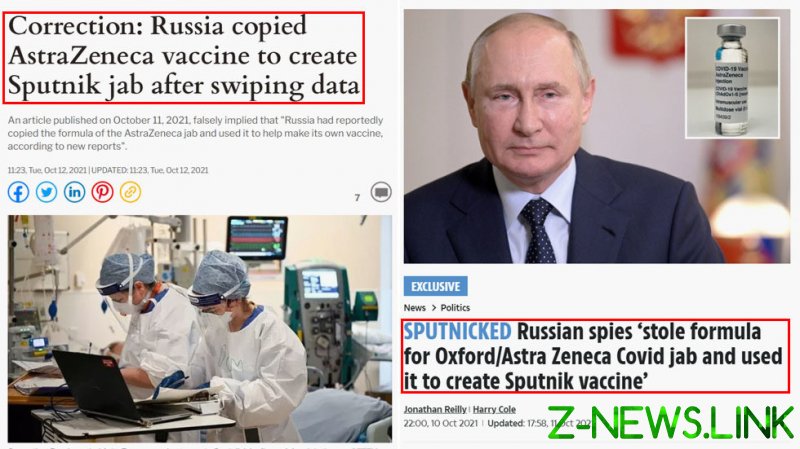 In a Monday ‘bombshell,’ the Sun claimed UK spies “have proof” that Moscow’s flagship Covid-19 vaccine, Sputnik V, was actually inspired by documents “swiped” from AstraZeneca “by a foreign agent in person.” The Express later published its own story, citing the Sun.

On Tuesday, however, the latter tabloid retracted the story entirely – leaving the original headline, but replacing the copy with the text of a statement by the Russian Direct Investment Fund, the outfit that funded Sputnik V’s development at the Gamaleya National Research Center in Moscow.

“The article also contained false information. As an apology, we are happy to set the record straight,” the Express noted in the correction.

The RDIF statement explains that Sputnik V uses two human adenovirus vectors, whereas the AstraZeneca jab opted for a chimpanzee adenovirus. Sputnik V, which is the world’s first registered vaccine against the novel coronavirus that causes Covid-19, was also based on years of prior research in the field – a fact that’s easily verifiable via public records.

“Rather than spreading fake stories, the UK media and Government services should better protect the reputation of AstraZeneca, a safe and efficient vaccine that is constantly attacked by competitors in the media with facts taken out of context,” the RDIF said.

The Sun has not retracted or corrected Monday’s article, however. The tabloid merely added a one-sentence quote from a London PR firm representing the RDIF to the end of the article, describing the original story as “another fake news and blatant lie based on anonymous sources.”

Monday’s claims by British spies, laundered by the tabloid of Hillsborough infamy, drew sharp criticism in Moscow. Gennady Onishchenko, a lawmaker from the ruling United Russia party who previously served as head of Russia’s health authority and a presidential aide, said that the people involved in the story ought to be fired and to seek psychiatric help.

“I suggest they send the Sun’s journalists for a psychological evaluation,” he told RIA Novosti. “And the MI6 employees should be fired for losing the ability to do their jobs.”