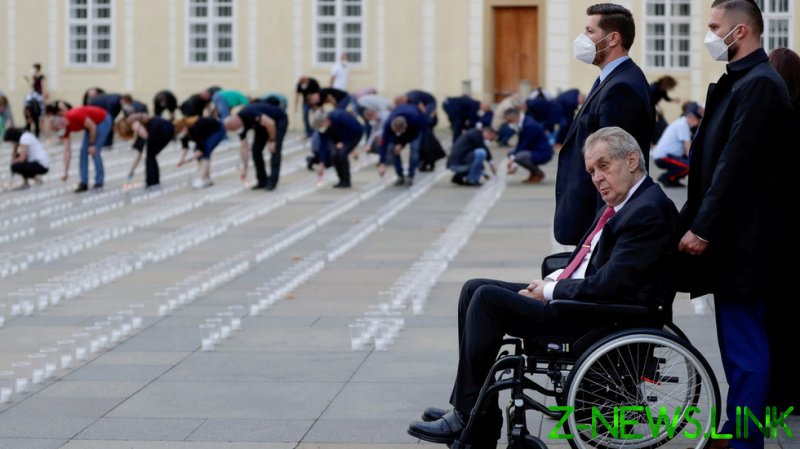 “I wish the president a speedy recovery but we are in a situation where clear procedures are needed if there is no speedy recovery,” the Senate’s Constitutional Committee Head Zdenek Hraba tweeted on Monday, as he announced that he would summon the commission. He initially said the meeting would be on October 10, before correcting himself and changing it to Tuesday the 19th.

Invoking Article 66 of the Czech Constitution, which specifies how the presidential powers are divided between other top officials in case he is unable to fulfill his duties, would be an issue on the agenda during the meeting, Hraba added.

The senator said he was really sorry to act in such a way but maintained that the officials “need to know who will appoint a new prime minister.”

Zeman was rushed to a Prague hospital and admitted to an intensive care unit (ICU) on Sunday, shortly after holding talks with the outgoing Prime Minister Andrej Babis about the formation of a new government.

He has remained in the ICU ever since, although the hospital spokeswoman said on Monday that his condition was stable and a team of professionals were looking after him.

Hospital director Miroslav Zavoral said earlier that the president was treated for complications related to a pre-existing condition, but provided no further details. The 77-year-old Zeman, who has been the head of state since 2013, started using a wheelchair earlier this year due to neuropathy in his legs. He also spent eight days in a hospital in September, recovering from what he described as dehydration and mild exhaustion.

Zeman’s abrupt hospitalization comes at a sensitive time for the Czech Republic, since it took place right after the general elections that saw Prime Minister Andrej Babis’ ANO party narrowly defeated by a center-right coalition ‘Together’ consisting of three smaller parties.

Another coalition – the liberal Pirates/Mayors – took third place in the vote. Zeman earlier promised Babis the first shot at forming a government if his party gets most seats, which it technically did, since ‘Together’ consists of three parties. Yet, both coalitions opposing the outgoing prime minister already announced starting the talks aimed at forming the new government. Together, they would occupy 108 seats in the 200-seat lower house.

In addition to Hraba, Senator Marek Hilšer has also called for replacing Zeman, if only temporarily.

“As a person, I wish Miloš Zeman a speedy recovery. But as a doctor, I know that he cannot exercise his office for at least some time,” he tweteed. “Therefore, as a senator, with respect for the Constitution, in these volatile times, I will support the temporary transition of the presidency to the Prime Minister and Speaker of the Chamber of Deputies.”

However, the push was slammed by the outgoing deputy prime minister Karel Havlicek, who called it premature and tasteless.

“I think it’s unnecessary, because no one has said anywhere that the post-election situation will not be addressed with standard tools,” he said.